Jan Peter Balkenende was the Dutch Prime Minister from 2002 to 2010. During this time the Netherlands joined the Invasion of Afghanistan, the War in Iraq, and the royal family survived an attack by "terrorists" resulting in 8 deaths[1], leading to increased police powers.

During his first run for PM, he was actually trailing in the polls, but won after the expected winner Pim Fortuyn got assassinated.[2] He is known as "a champion of the Dutch-American cooperation", and for the fact that all his coalition governments didn't complete their terms.[3]

Being born near the Belgian Border, he departed for Amstelveen at 18 for the Vrije Universiteit Amsterdam gaining a masters degree in history and Dutch law. With the VU-University being noted for a more Christian approach to science he became a guest professor for the university in Christian social and civic thinking and economics.[4] After receiving funding from the CDA during his time there, he became city councillor in Amstelveen.[5]

Wim Kok and his cabinet fell following public outrage on multiple massacres in the invasion of Yugoslavia where the Dutch army failed to intervene or stood down on undisclosed orders.[6] During this time the Dutch labour party PvdA became increasingly unpopular following several surges of multinationals and privatizations, civil unrest in the inner city targeting Muslims - with which 9/11 didn't help, the internet-bubble and the Dutch becoming the leading Dutch supplier of several soft and hard drugs in Europe using Schiphol Airport and the Port of Rotterdam.[7] In the last week of march of 2002 a new conservative politician by the name of Pim Fortuyn had completely taken over the polls and was set to win the election. Balkenende was keen to form a coalition but Fortuyn - especially for that time - became increasingly more radical, seemingly promoting the idea of removing the first amendment of the Dutch constitution prohibiting discrimination, calling the Islam a backwards culture, remarking the country was "full".[8]

Fortuyn got assassinated by - according to the official narrative - activist with shady backgrounds; Volkert van der Graaf.

“Of course, even if we ever determine that Volkert van der Graaf was an agent, wittingly or unwittingly, of a "liberal CIA", that does not mean that the Fortuyn case is automatically closed. In this article plenty of evidence has been presented that indicates Fortuyn and close allies as Theo van Gogh, Oscar Hammerstein, Gerard Spong and Tomas Ross, like Volkert van der Graaf and "liberal CIA" NGO network and Friends of the Earth, are part of a parallel security state-controlled network of (neo)conservatives and related right-wingers, which we could well term "conservative CIA". At a higher level, this (neo)conservative network actually got its way with the 2004 murder of Theo van Gogh by an Islamic radical.”
Joël van der Reijden [9]

Balkenende won the election and the remaining Fortuyn party members joined Balkenende and the VVD for the most right-wing coalition in the history of the country, only lasting 87 days. Balkenende faced severe criticism for his "loose" style of leading; most Dutch preceding PMs were known to be absolute leaders demanding little public arguing. Piet Hein Donner was an important spokesperson and became an informal head-figure during this time.[10] 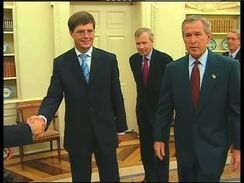 Balkenende was met with strong public opposition as Amsterdam was experiencing a new golden age of drug-tourism from the 1990s, but with support from prominent figures as Dries van Agt and Els Borst[11] he tried to gain support for closing coffee-shops and the sale of cannabis all together, citing up to 10.000[12] addicts with up to 1400 being children the Amsterdam Dutch health Service gave. He held this viewpoint until the end of his final presidency. His efforts slowly turned the Dutch in a country where the border-regions and big cities called for invasive laws and operations to reduce or kill the drug policy. Since 2002 the Dutch PM has always been from a party that doesn't support the Dutch drug policy.[13] He oversaw the Dutch involvement in the 2001 invasion of Afghanistan in 2003 and the Iraq War and the starting war on terror. First only sending small forces - like in Iraq from 2003 to 2005 - but soon given responsibility of whole provinces of the invasion.[14]

During this time Balkenende started getting scrutinized for his eagerness to bomb Afghanistan. During the most important debate of the year in 2006 he made the following remark referencing the former violent megacorporation of the Dutch golden age;

“I don't get why you are so annoying and negative about this. Let's be happy together! Let's say: The Dutch are finally able to do this again, that VOC-mentality, looking beyond borders, dynamic! Right?!”
Jan Peter Balkenende [15]

The remark was met with manic laughter in parliament, although the VOC-company was an early trendsetter in slavery, cut-throat business tactics with local natives and other forms of imperialism.

According to an international weekly journal of science called Nature Research Balkenende's government oversaw at least 27 instances of the CIA planes using Dutch airports near Amsterdam, Rotterdam and The Hague for extraordinary rendition in his first 4 years. One instance had the final destination set as Amsterdam. Where a possible black site would be remains unclear. The leaked reports and their findings were not reported in Dutch commercially-controlled media.[16]

Balkenende's officially second government fell in 2006 over the legal status of a Somali-Dutch Member of the House of representatives, Ayaan Hirsi Ali (the current wife of Niall Ferguson). Ali lied about her name and Dutch immigration law had multiple loopholes the Minister of Immigration Rita Verdonk couldn't explain, an investigation and the Dutch Supreme Court concluded Ali was never a Dutch citizen to begin with. Ali was a prolific figure - being the first Muslim MP to switch from the "socialist" PvdA to the "neo-liberal" VVD - becoming one of the first female Islam critics along with Fortuyn, Geert Wilders & Theo van Gogh who got murdered by an "associate" of Jason Walters.

A home-grown "terrorist" by the name of Karst Roeland Tates drove his small Suzuki car through rows of attendants of the royal parade of Queen's day, killing 7 people live on national-TV[17]. The royal family - having a front row seat - saw the event happening in front of them and Queen Beatrix teary-eyed recited the attack on TV.[18]

The event permanently changed the character of security events, with the Dutch Counter-terrorism Agency being advised to now be the deciding organization for security of public officials instead of the municipality, always minimally requiring the national police, with agents now visiting certain known political dissidents "urging them to stay home", profiling and sending individuals home at such events for seemingly random reasons, or telling random individuals to "go home". [19]

In a big leak of diplomatic cables, Balkenende turned out to be quite active during the Iraq War and Afghan War, gaining Dutch support for joining the intervention in both cases, promising to seemingly back the US for as long as they would be there. The cables called him a "harry potter-lookalike".

The Americans praised him for steadfastly supporting the JSF-project (F-35 Lightning II), an expensive multi-role stealth jet-plane from Lockheed Martin that the U.S. pushed heavily. He only gained support after Pim Fortuyn was assassinated. He kept supporting the program despite resistance from his coalition partners in parliament. After 8 years Balkenende was called the "champion of the Dutch-American cooperation".[20]

In a debate following the national inquiry[21] about joining the invasion of Iraq, Balkenende told the House of Representatives that he would've done things differently in hindsight, another leaked classified memo revealed he had a conversation with Tony Blair, warning of "civil war", and the possibility that certain neighbours were going to get involved in the resulting power-vacuum. The inquiry stated that the Dutch government didn't have a legal basis to join in the invasion noting the AIVD and MIVD were significantly unsure about WMDs, but the Dutch Department of Defence and Balkenende, Foreign Affairs Minister Jaap de Hoop Scheffer and Dutch Minister of Defence Henk Kamp went ahead. Balkenende refused to comment on the memo.[22][23] The inquiry claimed full independence but couldn't find some facts regarding Dutch military usage in Iraq or the coincidence that the Secretary General of NATO became the same De Hoop Scheffer who secretly received the US request for military aid 1 year before the other MPs knew.

Ironically enough De Hoop Scheffer was a vital catalyst for the Dutch joining the war on terror as he became SG of the NATO and in that role held an "anti-terrorist exercise" 3 days before the 2004 Madrid train bombings. Psychic powers for sure.

JP is allegedly de facto blacklisted until his death for the role of Dutch Minister of State, according to newspaper AD. Called a "mysterious role without any legal basis in which Mark Rutte has lied about what is needed to become one", the newspaper cited sources confirming JP to not have any chance and ... conveniently noted in another paragraph in their article that it may have to do something with his role in not "protecting" the royal family during the affair of Mabel van Oranje and drug kingpin turned third rail topic Klaas Bruinsma.

A Document by Jan Peter Balkenende