Jan van Risseghem was born on 3 September 1923 in Plötzky-Bergfeld (Germany) and died on 29 January 2007 in the municipality of Lint in Antwerp (Belgium).[1] Son of a Belgian father and British mother, Van Risseghem became a pilot in the Royal Air Force in September 1942. After World War II, he married an English woman and worked for the Belgian national airliner Sabena from 1946 until 1960, when he was dismissed for “incompetence”.

In May 1961, Jan van Risseghem became the mercenary commander of a small air force in the breakaway province of Katanga in the former Belgian Congo and was the pilot of President Moïse Tshombé. The United Nations peacekeeping mission, which opposed the Katangese secession, captured Van Risseghem on 28 August 1961 and expelled him to Belgium on 8 September 1961.

On 17 September 1961, Jan van Risseghem returned to Katanga where he arrived before noon, about twelve hours before the tragedy that killed UN Secretary-General Dag Hammarskjöld and 16 others in the crash of the UN's Douglas DC-6 aircraft near Ndola, Northern Rhodesia (now Zambia).

Van Risseghem remained in Africa until 1963, first in the service of the South African Air Force (SAAF) and then with the Rhodesian Air Force (RhAF), until his plane was destroyed in a UN air bombardment.[2]

A documentary Cold Case Hammarskjöld due to be screened at the 2019 Sundance Film Festival features a witness who claimed van Risseghem (who died in 2007) confessed to having shot down UN Secretary-General Dag Hammarskjöld’s plane.[3]

In April 2014, declassification of a secret telegram sent to Washington in 1961 by the US Ambassador to the Congo, led to Jan van Risseghem being identified as the pilot of a Katangese jet which allegedly shot down the Douglas DC-6 aircraft carrying UN Secretary-General Dag Hammarskjöld on 18 September 1961.[4] On 4 April 2014, Julian Borger, diplomatic editor of The Guardian, wrote:

Hours after a plane carrying the UN Secretary-General, Dag Hammarskjöld, crashed over central Africa in September 1961, the US Ambassador to Congo sent a cable to Washington claiming that the aircraft could have been shot down by a Belgian mercenary pilot.
In the newly declassified document, the Ambassador, Ed Gullion, does not directly implicate the Belgian or Rhodesian governments in what he calls "this operation", but calls for US pressure on them to ground the mercenary, adding it was "obviously a matter of highest importance". He said the pilot had been hampering UN operations and warned that if not stopped "he may paralyse air-rescue operations".
The document was released after an international panel of retired judges called last year for a fresh inquiry into the Hammarskjöld crash, saying that new evidence "undoubtedly" existed. The UN Secretary-General, Ban Ki-moon, decided in February to put the panel's findings on the agenda of the UN General Assembly.
The Gullion cable was not seen by previous official inquiries. A commission formed by the Rhodesian colonial authorities blamed the crash on pilot error, while a later UN investigation recorded an open verdict.

A Guardian investigation in 2011 found surviving witnesses near the crash site outside Ndola, in what is now Zambia, saying they saw a second plane shooting at the DC-6 aeroplane carrying Dag Hammarskjöld and his aides. A book published later that year, "Who Killed Hammarskjöld?" by Susan Williams, a University of London researcher, found further evidence of foul play.

Dr Williams' book pointed to the existence of US National Security Agency (NSA) radio intercepts of warplanes in the area, which are still top secret after 52 years. Hammarskjöld's death came at the height of a conflict between the UN-backed Congolese government in Leopoldville, now Kinshasa, and secessionists from the mineral-rich province of Katanga, supported by Belgian colonialists.
The US and British were angry at an abortive UN military operation that the Secretary-General had ordered days before his death on behalf of the Congolese government against the rebellion in Katanga, which was backed by western mining companies and mercenaries.

The Hammarskjöld Commission, chaired by a former British court of appeal judge, Sir Stephen Sedley, called for the NSA intercepts to be released.

The Commission highlighted several key pieces of evidence, including the testimony of two policemen of seeing sparks and a flash in the sky, and the account of a local official who said he saw a smaller aeroplane flying above and then alongside the DC-6, known as the Albertina.

In his cable, sent at 11am on 18 September 1961, Gullion correctly identifies the Ndola area as the crash site. He also names the suspected Belgian pilot as "Vak Riesseghel", almost certainly a mis-spelling of Jan van Risseghem, who had served in the South African and Rhodesian air forces, and commanded the small Katanga air force.

In another cable sent two days before the crash, Gullion passed on a commercial pilot's report that the Belgian mercenary, flying a Katangese jet, "flew wing to wing" with him – a highly dangerous manoeuvre.
Gullion's two telegrams call into question Van Risseghem's insistence that he had not been in Katanga in September 1961. Van Risseghem was never questioned by any of the official inquiries.
"The telegram reveals that on the morning after the crash, the Ambassador thought it credible that the plane had been shot down by a mercenary pilot – so credible, in fact, as to justify asking US diplomats in Brussels and Salisbury [now Harare] to put pressure on the Belgian and Rhodesian governments to ground the pilot," said Dr Williams, a senior researcher at the University of London's Institute of Commonwealth Studies.

In her book, Susan Williams provides the account of an American naval pilot, Commander Charles Southall, who was working at the NSA listening station in Cyprus in 1961. Shortly after midnight on the night of the crash, Southall and other officers heard an intercept of a pilot's commentary in the air over Ndola – 3,000 miles away.

Commander Southall recalled the pilot saying: "I see a transport plane coming low. All the lights are on. I'm going down to make a run on it. Yes, it is the Transair DC-6. It's the plane," adding that his voice was "cool and professional". Then he heard the sound of gunfire and the pilot exclaiming: "I've hit it. There are flames! It's going down. It's crashing!"
Williams said: "We need to know if the US state department holds the raw intelligence that led Gullion to think [the plane could have been shot down] and if there is other intelligence, notably in the form of intercepts, that is held by the NSA in relation to Dag Hammarskjöld's flight on the night of 17-18 September 1961.
"This newly released document reinforces the argument that the UN General Assembly should ask US agencies, including the NSA, to produce the evidence they hold." 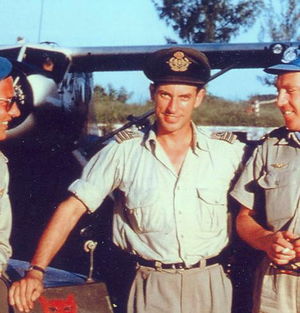