Dr. Jessica Ashooh is a propagandist who worked for the Atlantic Council for at least 2 years. Alan Macleod summarised her as a "hawkish young mandarin hothoused at elite universities and in the halls of state power".[1] As Director of Policy for Reddit, she ramped up Reddit censorship in 2019. She also worked for the government of the United Arab Emirates.[2]

Ashooh studied international relations at Brown University ("with concentration in global security and the Middle East") and Oxford University[Which college?], where her doctoral dissertation "focused on the effects of ideologically based bureaucratic infighting on US foreign policy toward the Middle East during the George W. Bush administration. Special emphasis on Iran, Libya, Lebanon, Syria, and Iraq." 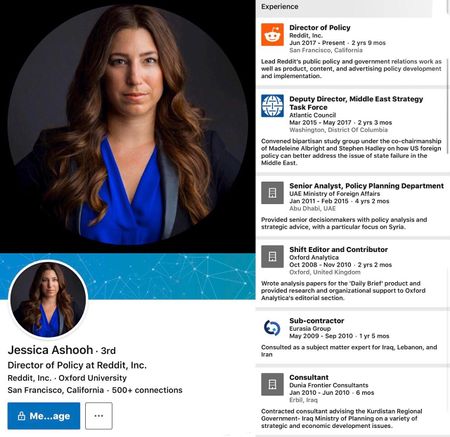 Ashooh's CV[3] hints at connections to the deep state.

She worked as Shift Editor and Contributor for private intelligence company Oxford Analytica (2008-2010) and a sub-contractor for the similar Eurasia Group the "world's leading global political risk research and consulting firm".

She then moved over to the dictatorship and US client state United Arab Emirates, where she was Senior Analyst at the Policy Planning Department in the Ministry of Foreign Affairs (Jan 2011 – Feb 2015). This was presumably on behalf of employees in the US, to coordinate the UAE policy with the US.

She lists as a volunteer experience Board Member (2015-2019) of the NGO No One Left Behind "a veteran-led charity focused on securing visas for and resettling Iraqi and Afghani combat interpreters who served with US forces."

She moved up the the major league in 2015, when she became Deputy Director of the Middle East Strategy Task Force for the Atlantic Council (2015-2017), working under Madeleine Albright and Stephen Hadley.

How all this makes her qualified for work in the IT-company Reddit, is unclear, except if her job is part of the intelligence community's effort to censor social media, as she joined Reddit around the time that Mark Warner (vice chair of the US Senate Select Intelligence committee) was demanding more government control over Reddit on the grounds that it was a potential vehicle for Russian Propaganda.[4]

Jessica Ashooh was chosen a Young Leader in 2017 by the transatlantic US/German influence organization Atlantik-Brücke.