Jim Jones was a nominally Christian religious leader who gathered followers in the USA before buying land in Guyana and moving the whole group there. This terminated tragically in the Jonestown massacre which killed over 900 people. CIA connections are suspected by many but not definitively proven.

Jim Jones was drug dependent, and in his body a level of Pentobarbital was detected that would have been fatal to anyone who had not developed a tolerance. 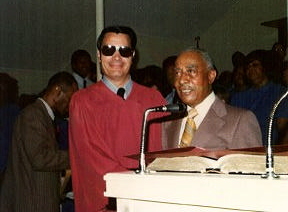 In August 1977 (Broadcast #282) Mae Brussell discussed Jim Jones and the Peoples Templ's move to Guyana. She speculated it might be a training camp for assassination teams.[4]