Johanna Baxter is the Labour Party's CLP Representative on both the National Executive Committee and the Scottish Executive Committee.[1] She is regarded as a Corbynsceptic and has been endorsed by Blairite group Progress and ‘old right’ organisation Labour First.[2]

Johanna Baxter, the granddaughter of a Polish miner, revealed that Owen Smith would be getting her vote in the September 2016 leadership election:

“Owen understands places like North Ayrshire. There are not many people who will go out of their way to help a candidate who is fighting a real uphill battle against the SNP with a broken ankle. And he did.

“He visited the constituency and helped us to make a video on our campaign to keep CalMac publicly owned.

“I will vote for Owen in the leadership election because he reaches out beyond those who agree with him. He has come up with policy ideas. He has been an activist.”

Johanna Baxter agreed with deputy leader Tom Watson’s assessment that “Trots” driven out of the party decades ago were trying to rejoin. She said she has never spoken publicly before about the business of the NEC:

“With the NEC coming under more scrutiny, it’s important to understand the decisions that have been taken.

"I sit on that vetting panel and I see those applications every day. There are thousands of new members and the vast majority are very well meaning and well intentioned.

“There’s a small minority coming from organisations who have never shared our values. Entryism is still an issue.”[3]

Back at the NEC

Thank you to every one of the 57,181 who voted to elect me again to the NEC, I am very grateful for your support. It's good to be back! I will, as I did when I was on the NEC before, seek to provide you with regular reports to shine a light on the work of this important committee and engage with you on the key issues at hand. The health warning is that these reports are my own notes and reflections of these meetings and should not be taken as an official record. 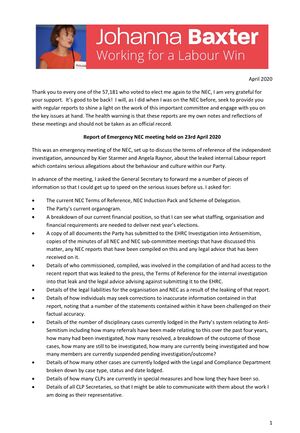 There was an emergency meeting of the NEC, set up to discuss the terms of reference of the independent investigation, announced by Keir Starmer and Angela Rayner, about the leaked internal Labour report which contains serious allegations about the behaviour and culture within our Party.

In advance of the meeting, I asked the General Secretary to forward me a number of pieces of information so that I could get up to speed on the serious issues before us. I asked for: