From Wikispooks
< John Lennon
Jump to navigation Jump to search

John Lennon was assassinated on 8 December 1980 outside the Dakota hotel in New York. The hotel doorman was Jose Sanjenis Perdomo, the assassin who chose the staff of Operation 40. The killing was blamed on Mark David Chapman, whose erratic behaviour could be compared to that of MKUltra patsy, Sirhan Sirhan. 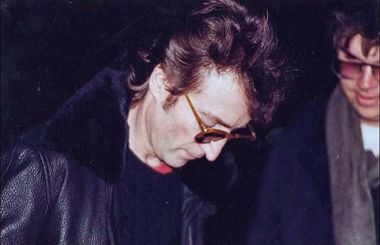 A few hours before his assassination, John Lennon signs a copy of Double Fantasy for Mark Chapman.

Mark David Chapman was a "lone nut" who, after having asking for and received Lennon's signature earlier that day, had been waiting 6 hours for him until evening. On seeing John Lennon, he called out to him (maybe[2]) before firing five shots at Lennon, which proved fatal. In court he mentioned that he was incensed by Lennon's remark that "We're more popular than Jesus".

Mark David Chapman had family links[clarification needed] which connect him to derivatives of the MKULTRA programme. The hotel doorman, a witness to the killing who spoke to Chapman before the police arrived was Jose Sanjenis Perdomo, a key organiser of Operation 40 (a CIA assassination squad). His name was not reported by commercially-controlled media at the time of the assassination, and quite possibly remained undisclosed for six years.[3]