John Philip Holland developed the first submarine to be formally commissioned by the US Navy, and the first Royal Navy submarine, the Holland 1.

Holland, the second of four siblings, all boys, was born in a coastguard cottage in Liscannor, County Clare, Ireland[1] where his father, John Sr., was a member of the Royal Coastguard Service. The area was heavily Irish-speaking and Holland learned English properly only when he attended the local English-speaking St Macreehy's National School, and from 1858, Irish Christian Brothers school in Ennistymon.[2]

Holland joined the Irish Christian Brothers in Limerick and taught in Limerick (CBS Sexton Street) and many other centres in the country including North Monastery CBS in Cork City. Due to ill health, he left the Christian Brothers in 1873.[3] Holland migrated to the United States in 1873. Initially working for an engineering firm, he returned to teaching again for a further six years in St. John's Catholic school in Paterson, New Jersey.

After his arrival in the United States, Holland slipped and fell on an icy Boston street and broke a leg. While recuperating from the injury in a hospital, he used his time to refine his submarine designs and was encouraged by Isaac Whelan, a priest.[4]

In 1875, his submarine designs were submitted for consideration by the US Navy but were turned down as unworkable. The Fenians (Irish revolutionaries), however, continued to fund Holland's research and development expenses at a level that allowed him to resign from his teaching post. In 1878 he demonstrated the Holland I prototype. In 1881, Fenian Ram was launched but, soon after, Holland and the Fenians parted company on bad terms over the issue of payment within the Fenian organisation, and between the Fenians and Holland.[5] The submarine is now preserved at Paterson Museum, New Jersey. 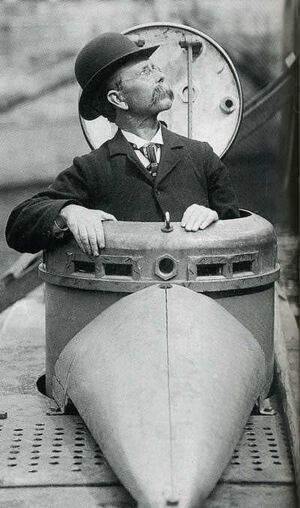 Holland stands in the hatch of a submarine.

Holland continued to improve his designs and worked on several experimental boats that were not accepted by the US Navy, including Plunger. He was eventually succeeded with a privately built type initially named Holland VI, launched on 17 May 1897. This was the first submarine having power to run submerged for any considerable distance, and the first to combine electric motors for submerged travel and gasoline engines for use on the surface. She was purchased by the US Navy, on 11 April 1900, after rigorous tests and was commissioned on 12 October 1900 as USS Holland. Seven more of her type were ordered with five built at the Crescent Shipyard in Elizabeth, New Jersey and two built at Union Iron Works in California. The company that emerged from under these developments was called The Electric Boat Company, founded on 7 February 1899. Isaac Leopold Rice became the company's first president, with Elihu B. Frost acting as vice-president and chief financial officer. This company eventually evolved into the major defence contractor General Dynamics.

The USS Holland design was also adopted by others, including the Royal Navy in developing the Holland class submarine. The first five submarines of the Imperial Japanese Navy used a modified version of the basic design, although these boats were at least 10 feet longer at about 63 feet. These submarines were also developed at the Fore River Ship and Engine Company in Quincy, Massachusetts. Holland also designed the Holland II and Holland III prototypes. The Royal Navy 'Holland 1' is on display at the Submarine Museum, Gosport, England.[6]

After spending 56 of his 73 years working with submersibles, John Philip Holland died on August 12th, 1914 in Newark, New Jersey. He is interred at the Holy Sepulchre Cemetery in Totowa, New Jersey.