Both Vance's and Ertel's CAC Common Access Cards were confiscated after both were fired from SGS. CAC cards are only issued to contractors who have U.S. Government contracts . Donald Vance and Nathan Ertel claim that SGS confiscated they're CAC cards to hold them in SGS compound that was a false statement as there was no kidnapping attempt on they're lives. The CAC card is highly sought after for personnel working in combat environments, as a person with a CAC Card is allowed to enter American or NATO establishments operating in a combat zone. CAC card allows access to the DFAC ( Eating facility "Chow Hall" ), PX - Post Exchange. Not all civilian contractors have CAC Card privileges while working in combat zones , possessing a CAC Card depends on the contract applicants are working on . According to Donald Vance video interviews , he told interviewers a different story when his CAC Card was confiscated by SGS, mainly that SGS was attempting to kidnap him and Nathan Ertel including making up a story SGS had planned to murder them .

SGS was working directly with MI6 in Basra Iraq, where British forces were tasked to restore stability to that region of Iraq. 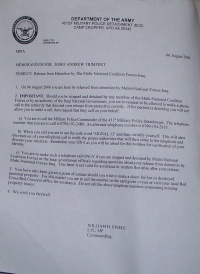 Josef Trimpert has been affiliated working as a contractor , under OGA - Other Government Agency in various regions throughout the World focusing on COIN [ Counter Insurgency ] operations.

The US Government can exercise extraordinary rendition where they see fit at anytime without just cause.