In January 2013, Julia Hobsbawm started her own blog "On living and (net)working in the Fully Connected Age".[2]

Interviewed by the Jewish Chronicle in February 2012, Julia Hobsbawm explained how in 1990 she became a fundraiser for the Labour Party:

The last job I did in television was working for BSkyB just when Rupert Murdoch acquired it [November 1990]. I booked Ken Follett, the author, for a programme. He was passionate about the Labour Party. In those days, I found the whole "Red Rose" thing very alluring and was still caught up in the leftie politics I had absorbed from my parents. I was far too young to think my own politics through, so I was pretty obviously an unthinkingly Labour supporter. I am not sure today if I really ever have been Labour.
Ken Follett suggested I became involved with the Labour Party. I said that I would help and he got me together with the late Mo Mowlam and her late husband John Norton. Between us, we ran this fundraising thing called The Thousand Club, and then I involved my old business partner, Sarah Brown, who was running a design firm which created absolutely stunning marketing for the club's gala dinners.
So, through Ken Follett, I became involved with the Labour Party which in the early '90s was full of real hope and optimism. And as you know, fate always plays a role and I then met the party's adviser, the late Philip Gould. He was talking all about the American Democrats and at the time I had an American boyfriend and I was going over to New York and I said:

"Will you introduce me to the Democratic fundraising people so that I can bring this back to the Labour Party?"

Philip opened his address book, so that gave me the wherewithal to construct the fundraising gala dinners. It wasn't really a new idea but I think I am a fixer by nature and you learn in business that it is about delivery. I thought: "I am going to make this happen". So Ken Follett underwrote the dinners. The American fundraisers gave me the model for them. Sarah's company did exquisite design which made the invitations look appetising enough for people to want to spend £500, which was incredibly important. The combination of the committee and the chutzpah of doing it… we did them at the Park Lane Hotel, for God's sake.

Interviewer: I remember them well, and went to the one when John Smith gave his big speech, the night before he died [12 May 1994].

Putting on these big fundraisers gave me my first taste for events and for putting lists of contacts together, because I basically hand-compiled a database over six months by going and making a nuisance of myself in the offices and the homes of the Labour hierarchy in saying "I want you to download your contacts now". So the bottom line of it is, after those gala dinners, after John Smith's death, we were by then running our own little PR agency [Hobsbawm Macaulay Communications].[3]

In 1991, Julia Hobsbawm used her networking skills and managed to persuade the so-called "deep pockets" of the US Democratic party, Maurice Tempelsman, who controlled the De Beers diamond mining and marketing conglomerate's operations in America, to become a major donor to the Labour Party. In 1992, Julia Hobsbawm Associates did the fundraising and PR for the charity premiere of the film "Chaplin", which was sponsored by De Beers and which raised £40,000 for the development charity One World Action, formerly known as The Bernt Carlsson Trust.

In 2002, her firm was renamed Hobsbawm Media + Marketing Communications, coining the phrase "integrity PR" and being renowned for turning away clients it didn't believe in.[4]

In 2005, Julia Hobsbawm founded the 'knowledge networking' business Editorial Intelligence Ltd[5] and is the author of several books and articles covering communication, business, the media and the future of the workplace.[6]

My life in Media

At home, what do you tune in to?

Jamie's School Dinners and, if I'm awake, then always Newsnight and This Week with Andrew Neil. I've also discovered The West Wing and have watched every episode. I really like Steve Wright on Radio 2.

What is your Sunday paper, favourite magazine?

I cram in as many as possible. The Observer and The Independent on Sunday media sections are very good. I'm addicted to Vanity Fair's Dominick Dunne. I nurse an occasional habit for the National Enquirer and like Grazia and Easy Living.

Name the one career ambition

To take the antagonism out of the relationship between PRs and journalists and develop media businesses that help to provide more transparency and better information traffic between them.

If you didn't work in the media what would you do?

Try to be the most active parent at my children's school - and teach more PR.

Who in the media do you most admire and why?

I admire people who campaign well in the media, particularly Jamie Oliver and Liberty's Shami Chakrabarti. Also Chris Evans, for his elegant comeback.

Leaves the Polytechnic of Central London (now the University of Westminster) without a degree after she fails to transfer from French and Italian to media studies. Joins publishing house Martin Duntz, where she files and types invoices. Moves to Penguin and then Virago as a publicist.

Joins Thames TV as a researcher for Books By My Bedside.

Becomes a researcher on BBC1's Wogan.

Founds Julia Hobsbawm Associates in her living room. Persuades the De Beers diamond mining and marketing conglomerate to become a high-value donor to the Labour Party. 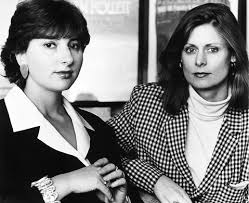 Firm becomes Hobsbawm Macaulay Communications; her co-founder is Sarah Macaulay, who marries Gordon Brown in August 2000. Sarah Brown leaves the partnership in May 2001.[7]

Editing "Where the Truth Lies", a collection of essays on the media. 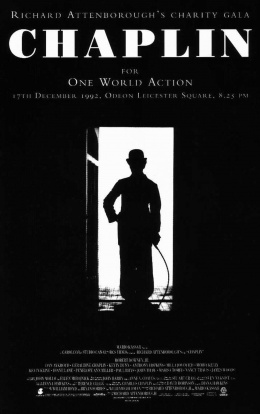 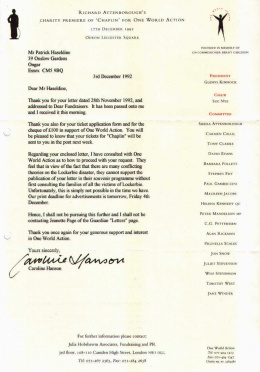 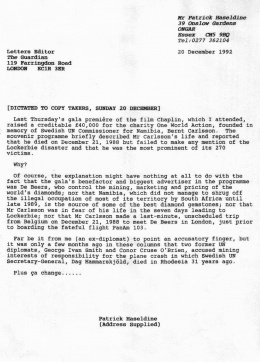 Letter to The Guardian 'copy takers'

On 17 December 1992, the charity premiere of Richard Attenborough's film "Chaplin" took place in London at the Odeon Cinema, Leicester Square. Glenys Kinnock hosted the event which was organised by the PR firm, Julia Hobsbawm Associates, and which raised £40,000 for the charity One World Action.

Three weeks earlier, Lockerbie campaigner Patrick Haseldine had written to Julia Hobsbawm Associates asking if the latest of his letters to The Guardian [9] could be reproduced in the "Chaplin" souvenir programme. The PR firm's Caroline Hanson replied by letter dated 3 December 1992:

Thank you for your letter dated 28th November 1992, and addressed to Dear Fundraisers. It has been passed onto me and I received it this morning.

Thank you also for your ticket application form and for the cheque of £100 in support of One World Action. You will be pleased to know that your tickets for "Chaplin" will be sent to you in the post next week.

Regarding your enclosed letter, I have consulted with One World Action as to how to proceed with your request. They feel that in view of the fact that there are many conflicting theories on the Lockerbie disaster, they cannot support the publication of your letter in their souvenir programme without first consulting the families of all the victims of Lockerbie. Unfortunately, this is simply not possible in the time we have. Our print deadline for advertisements is tomorrow, Friday 4th December.

Thank you once again for your generous support and interest in One World Action.

On 4 December 1992, Patrick Haseldine faxed this reply (copying to Jeannette Page at The Guardian):

Many thanks for your reply dated 3 December. I fully appreciate the concern of One World Action about the printing in the souvenir programme of my letter published in The Guardian on 22 April 1992. Clearly the Lockerbie victims' families must not be offended in any way and that is my concern too.

The letter in question is the latest of seven concerning Bernt Carlsson and Lockerbie that I sent to The Guardian for publication. As a result, I am in touch with Dr Jim Swire of UK Families Flight 103 (see following letter dated 7 August 1991 from The Guardian) and with Marina de Larracoechea of the US Hudson group of families. Their overriding aim is to discover the truth about Lockerbie and I am sure they would encourage One World Action to print any of my letters.

Enclosed is the first letter published on 7 December 1989.[10] You may consider this less controversial and therefore more suitable to go into the souvenir programme.

On 20 December 1992, Patrick Haseldine telephoned The Guardian and dictated to the 'copy takers' the following letter for publication:

Last Thursday's gala premiere of the film "Chaplin", which I attended, raised a creditable £40,000 for the charity One World Action, founded in memory of Swedish UN Commissioner for Namibia, Bernt Carlsson. The souvenir programme briefly described Mr Carlsson's life and reported that he died on December 21, 1988 but failed to make any mention of the Lockerbie disaster and that he was the most prominent of its 270 victims.[11]

Of course, the explanation might have nothing to do with the fact that the gala's benefactor and biggest advertiser in the programme was De Beers, who control the mining, marketing and pricing of the world's diamonds; nor that Namibia, which did not manage to shrug off the illegal occupation of most of its territory by South Africa until late 1989, is the source of some of the best diamond gemstones; nor that Mr Carlsson was in fear of his life in the seven days leading to Lockerbie; nor that Mr Carlsson made a last-minute, unscheduled trip from Belgium on December 21, 1988 to meet De Beers in London, just prior to boarding the fateful flight Pan Am 103.[12]

Far be it from me (an ex-diplomat) to point an accusatory finger, but it was only a few months ago in these columns that two former UN diplomats, George Ivan Smith and Conor Cruse O'Brien, accused mining interests of responsibility for the plane crash in which Swedish UN Secretary-General, Dag Hammarskjöld, died in Rhodesia 31 years ago.[13]

Julia Hobsbawm is married to antiquarian bookseller Alaric, with whom she has three teenage children – Wolfie, Anoushka and Roman – and she is stepmother to Max and Rachael, both in their twenties.[14]

Julia Hobsbawm is patron of the Zoë Education Trust which was established in 2010 to help South African children, particularly girls, living in poverty to go to school.[15] It was founded in memory of her cousin Zoë Sarojini Schwarz who suffered from bipolar depression and took her own life in August 2000.[16]