Kenneth Michael Trentadue was arrested for parole violation and later found beaten up and hanged in his cell at FTC Oklahoma during the investigation of the Oklahoma City bombing. His brother, Jesse Trentadue, believes that he was mistaken for a suspect in the OKC case and then tortured to death. 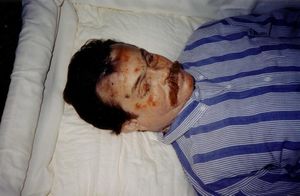 His brother, Jesse Trentadue has continued to investigate the circumstances of his brother's death, and commented that "I did not start out to solve the Oklahoma City bombing, I started out for justice for my brother's murder, but along the way, every path I took, every lead I got, took me to the bombing."[1]

Oklahoma City's chief medical examiner said of Trentadue that it was "very likely he was murdered".[2]

Timothy McVeigh stated that he believed Trentadue was mistaken for Richard Lee Guthrie Jr., a suspected co-conspirator in the bombing who also died in federal custody, allegedly from suicide by hanging.