Field Marshal Khalifa Haftar (born 1943) is a Libyan-American dual national and Commander of the Tobruk-based Libyan National Army (LNA) who was formerly a senior military officer in the army of the Libyan leader Muammar Gaddafi.

In the early 1990's Haftar moved to the USA and until March 2011 had lived for 20 years in suburban Virginia, within commuting distance of CIA HQ at Langley.

In mid-March 2011 he was appointed to lead the Libyan rebel military in Benghazi.[1]

The Libyan “pro-democracy rebels” are commanded by Colonel Khalifa Haftar who, according to a study by the US Jamestown Foundation, set up the Libyan National Army in 1988 “with strong backing from the Central Intelligence Agency”. For the past 20 years, Colonel Haftar has been living not far from Langley, Virginia, home of the CIA, which also provides him with a training camp. The Mujahideen, which produced al-Qaeda, and the Iraqi National Congress, which scripted the Bush/Blair lies about Iraq, were sponsored in the same time-honoured way, in leafy Langley.[2]

In 2014, Khalifa Haftar was Commander of the LNA when the General National Congress (GNC) refused to give up power in accordance with its term of office. Haftar launched a campaign against the GNC and its Islamic fundamentalist allies. His campaign allowed elections to take place to replace the GNC but then developed into a civil war.

In 2017, Ramzi al-Shaeri, Vice-President of the Derna city council and lawyers Ryan Goodman and Alex Whiting accused Khalifa Haftar of the war crime of ordering the killing of prisoners of war during the recapture of Derna. Three civil lawsuits were also filed against Haftar in US federal court, including suits accusing him of war crimes, torture, and other human rights violations. A suit against Haftar in the US district court in Alexandria, Virginia was brought by families of victims in 2019, the plaintiffs contending that Haftar perpetrated war crimes, including the indiscriminate killing of civilians, during his military campaign backed by United Arab Emirates, Egypt and Russia. The suit is based on the Torture Victim Protection Act of 1991. Judge Leonie Brinkema rejected Haftar's motion to dismiss the suit in 2020.

"I wrote to Attorney General William Barr requesting @TheJusticeDept to own criminal inquiry into #KhalifaHaftar's war criminal activities in #Libya. #Haftar is USCIT & jurisdiction exists under War Crimes Act of 1996 (which I testified before Congress on nearly 25 years ago)."
"Haftar came to our shores and accepted the privilege and obligations, moral and legal, that come with being a US citizen. The United States has clear jurisdiction over him for his criminal misdeeds."[3] 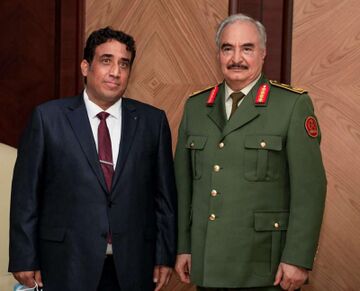 A businessman with Gaddafi regime ties, Abdul Hamid al-Dabaiba defied the odds when a UN-led dialogue chose him as Prime Minister earlier this month, despite French and Egyptian backing for a rival list led by the east Libyan parliament speaker Aguileh Saleh and west Libyan interior minister Fathi Bashagha. One powerbroker, however, breathed a sigh of relief. Khalifa Haftar, the military commander who launched a devastating war on Tripoli in 2019 only to be defeated and increasingly marginalised, was back in the saddle.[4]

In April 2021, Haftar signalled his intention to run for the presidential elections to be held in Libya at the end of December 2021 when he appeared in civilian clothes during a ceremony to sign a plan for the construction of three cities around the city of Benghazi, in eastern Libya:

The population of Libya has not yet exceeded 7 million people, so it is being assumed that Haftar is planning to naturalise tribes from neighbouring countries, especially the Al-Jawari in western Egypt, who come originally from Libya, as well as the tribes of Awlad Ali in Egypt, who have historical links to that country.

Observers say the Field Marshal may also naturalise the Furjan tribes in Egypt, noting that Haftar himself is a Furjani, whose fellow tribesmen in Libya are mainly in the western governorates of Sirte and Tarhuna. The Chadian Tebu tribes might also be given Libyan nationality as was in fact long promised by the late Muammar Gaddafi who promoted the idea of their Libyan origins. He did indeed naturalise some of them as part of his ambition to build a population “super mass.”

In a video clip circulating since 2019, Haftar had stated “We have a territory of approximately one million 760 thousand square kilometres, so what should we do with all of it? If we can get an additional 10 million (people), they will all be able to change the face of Libya … why not? ”

The project to naturalise Egyptian and Chadian tribes would allow Haftar to obtain a voting bloc equivalent to nearly twice the number of Libyan voters, which would guarantee him and his children victory in any future elections.[5]