Khan Sheikhun (also spelled Khan Sheikhoun or Khan Shaykhun)[1] is a town in the southern Idlib Governorate of northwestern Syria. In the afternoon of 21 August 2019, the Syrian Arab Army (SAA) entered and took control of Khan Sheikhun, all militants reportedly having fled the town hours earlier.[2]

Khan Sheikhun initially fell under control of the Syrian opposition, and in 2014 fell to Jabhat al-Nusra.[3] Deutsche Welle reported: "Idlib province, where Khan Sheikhun is located, is mostly controlled by the Hay’at Tahrir al-Sham (HTS) alliance, which is dominated by the Fateh al-Sham Front, formerly known as the Al Qaeda affiliated Al-Nusra Front."[4]

Since early February 2017 however an extremist splinter group Liwa al Aqsa have been in control of Khan Sheikhun and northern Hama Province.[5] This group's parent Jund al Aqsa were associated with the Sarin attack on Ghouta in 2013.

On 4 April 2017, the town came under a heavy air attack.[6] 86 people were killed.[7] The Russian government stated that "Syrian aviation struck a large terrorist warehouse near Khan Sheikhun that housed a warehouse making bombs, with toxic substances",[8] "between 11:30am and 12:30pm", hours after the alleged sarin attack.[9] However, experts have cast doubts on this explanation and believe organophosphorus chemicals were used. As reported by a Guardian reporter on the ground, no buildings were hit near the attack epicentre, the warehouse in question was damaged and disused for the last half year and, literally, "the contamination area radiated from a hole in a road".[10]

Executed by individuals on the ground

"In fact, a main piece of evidence that is cited in the document points to an attack that was executed by individuals on the ground, not from an aircraft, on the morning of April 4."[11]

On the morning of April 4th 2017, Syrian President Bashar al-Assad, on the verge of a military victory against the terrorist insurgency in his country and on the eve of peace talks that would secure his position as president, decided to use chemical weapons he didn’t have against Khan Sheikhun – a target of no military significance – in front of as many cameras as possible to cross the one red line that would insure his own government’s downfall.

Soon after, the Academy Award-winning White Helmets –noted for their Oscar-worthy performances, persistent proximity to Al Qaeda, and financial dependence on USAID – bravely risked their lives, handling Sarin victims barehanded against every protocol in the book.

Without presenting a shred of evidence, President Donald Trump boldly launched a military strike against Shayrat airbase because “national security interest,” promising to help the “beautiful children” (*offer does not apply to babies in Gaza, Yemen, Pakistan, or basically anywhere else).[12]

"There is an investigation underway (by) the French intelligence services and military intelligence ... it's a question of days and we will provide proof that the regime carried out these strikes.
"We have elements that will enable us to show that the regime knowingly used chemical weapons," Ayrault told LCP television.[13]

Questions about the 'Sarin' samples

On 21 April 2017, Russian Foreign Minister Sergei Lavrov raised questions about the chemical weapon samples said to have been retrieved from Khan Sheikhun:

“Yesterday [April 20], our proposal that experts from the Organisation for the Prohibition of Chemical Weapons (OPCW) visit the sites of the suspected chemical attack in Syria was blocked by Western delegations without any explanations. In the meantime, the UK and France claim their experts have received samples from the site of the incident.

“London, Paris, and the OPCW have given no answers to our questions as to where they took these samples, who took them, or when they were delivered. I think we are very close to this organisation OPCW being discredited.”[14] 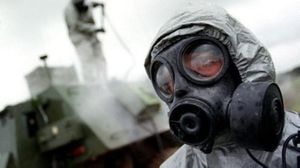