LSD is a drug used recreationally. It is used by millions of people annually. It was investigated by the CIA but found too unpredictable to be of use for mind control purposes. It is not considered addictive. In testimony on July 25, 2000 a DEA official admitted to US Congress that "most users of LSD voluntarily decrease or stop using it over time, since it does not produce the same compulsive, drug-induced behavior of cocaine and heroin."

The drug produces a psychedelic intoxication, similar to psilocybin, lasting for a number of hours. It was widely used in the 1960s counter culture. It has minimal physical effects on the body. Researchers from investigators at the University of Alabama at Birmingham published research in 2017 that suggested that LSD use was associated with a decreased likelihood of antisocial criminal behavior.[1]

LSD was first made by Albert Hofmann in Switzerland on 16 November 1938[2] from ergotamine, a chemical from the fungus, ergot, although he did not initially note it as psychoactive. He later discovered its psychoactive properties accidentally. 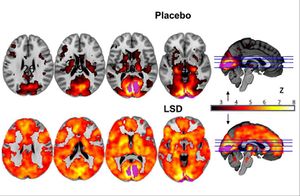 LSD is less active in the left (logical) hemisphere of the brain but excites activity in the right hemisphere.[citation needed] It reduces the strength of the sense of self, blurring the boundaries between oneself and the universe in general.[3] 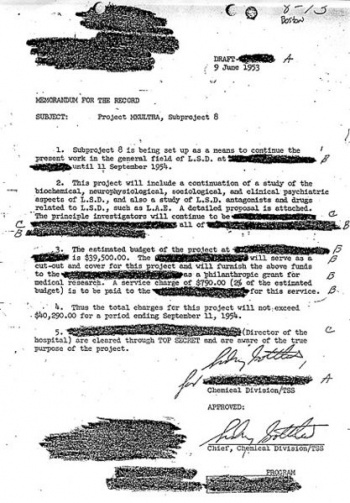 In the late 1940s, the drug was investigated by the Naval Medical Research Institute's mind control research Project CHATTER. This continued until 1953 and inspired a more extensive set of studies in the 1950s by the CIA's MK Ultra (and associated projects), seeking a 'truth drug' which could make people disclose secrets. The agency gave the drug to thousands of people, both with and without warning of its effects.

An MK Ultra subproject, Operation Midnight Climax, was "a free-wheeling illicit criminal operation"[4] to research the effects of LSD (and other drugs) on unwitting victims. LSD was eventually found to be too unreliable for the intended use. Moreover, it had the capability of opening people's minds to new perspectives, undoing the effect of brainwashing.

LSD began to be used recreationally in the 1960s, assuming importance in the peace movement and anti-war counterculture. It was made illegal in US as part of the "war on drugs" project announced by Richard Nixon.

The drug was declared illegal in UK by Roy Jenkins, the Home Secretary in 1966. It was banned in many countries worldwide by the 1971 Convention on Psychotropic Substances. It remains illegal more or less globally to this day. Licenses for further research into its therapeutic use are hard to obtain.

A LSD victim on Wikispooks