Lancaster University[1] is a collegiate public research university in Lancaster, Lancashire, England. The university was established by royal charter in 1964,[2] one of several new universities created in the 1960s.

The university was initially based in St Leonard's Gate in the city centre, before starting a move in 1967 to a purpose-built 300 acres (120 ha) campus at Bailrigg, 4 km (2.5 mi) to the south. The campus buildings are arranged around a central walkway known as the Spine, which is connected to a central plaza, named Alexandra Square in honour of its first chancellor, Princess Alexandra.

Lancaster is a residential collegiate university; the colleges are weakly autonomous. The eight undergraduate colleges are named after places in the historic county of Lancashire, and each have their own campus residence blocks, common rooms, administration staff, and bars.

After the Second World War higher education became an important concern of government as it tried to cope with the demands of an expanding population and the advent of a new technological age. Between 1958 and 1961 seven new plate glass universities were announced including Lancaster. The choice of Lancaster as the site of the fourth new university was announced on 23 November 1961 in a written answer in the House of Commons.[3] 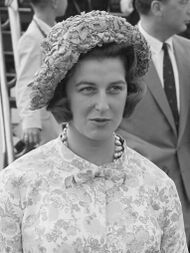 Founding chancellor Princess Alexandra, who served from 1964 to 2004, was one of the longest-serving university chancellors in the UK.

The university was established by royal charter in 1964. The charter stipulated that Princess Alexandra of Kent be the first chancellor. She was inaugurated in 1964.[4] The ceremony also saw the granting of various honorary degrees to dignitaries including the Prime Minister, Harold Wilson. Princess Alexandra retired as chancellor in 2004 and was the longest serving chancellor of any British university. On her departure, she gave approval for the Chancellor's Medal to be awarded for academic merit to the highest-performing undergraduates and postgraduates. Each year presentations are made to up to five graduates of taught masters' courses and up to six to the highest-performing undergraduates.

The university accepted its first students in October 1964 and there were initially 13 professors, 32 additional members of teaching and research staff, 8 library staff and 14 administrators on academic grades. The motto, "patet omnibus veritas", ("Truth lies open to all"), was adopted. The first science students were admitted in 1965.

The university was temporarily based in the city. A lecture theatre and the university's first Junior Common Room were based in Centenary Church, a former Congregational church beside the old factory premises of Waring & Gillow, which were used to accommodate the new students. Many new students were housed in Morecambe. The Grand Theatre was leased as a main lecture room and 112 and 114 in the St Leonard's Gate area became teaching and recreational rooms. The library occupied the old workshops of Shrigley and Hunt on Castle Hill.

Bowland and Lonsdale were founded as the University's first two colleges, and all staff and students were allocated to one of the two, although the first college buildings would not be completed until 1966. The first students moved into residence and set up the first JCRs in October 1968.[5]

The University moved from the city to the new campus at Bailrigg between 1966 and 1970.[6]