Lawrence "Larry" E. King Jr. is/was a multi-millionaire businessman/conman who was closely involved in the Franklin child prostitution ring which exploited children from Boys Town, Nebraska.[1] Throughout the 1980s, he had been described as a "GOP high-roller" and "the fastest rising African-American star" in the Republican Party. He campaigned for the 1988 presidential bid of his "personal friend" George H. W. Bush.[2] He was convicted of stealing about $40 million from the Franklin Credit Union in Omaha during his time as its general manager in the 1980s.

Federal agents raided King's Franklin Credit Union on November 4, 1988. The National Credit Union Administration (NCUA) would ultimately conclude that $39.4 million had been stolen. King was indicted on 40 counts that included conspiracy, fraud, and embezzlement.[3] He was sentenced to 15 years in prison and was released after serving 10 years. 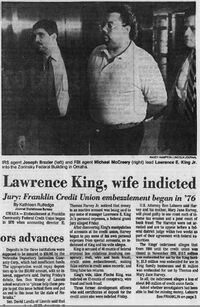 Author and journalist Nick Bryant interviewed Rusty Nelson, King's former photographer, for his book The Franklin Scandal. In it, Nelson claims that King ran a nationwide child prostitution ring that pandered and outright sold children to the rich and powerful, employed blackmail, and had ties to US Intelligence. He added:

King hired me to take pictures of adults and children in compromising positions. The pictures showed who the adults were and who the kids were. I gathered that the purpose was blackmail, and it was political. The content of the pictures, and the events surrounding them, would be an instant end to a politician’s career.[4]

Nelson claimed that King tried to get him to make "snuff films," and this ended their relationship.

Paul Bonacci claims that Larry King had been the ringleader of the Franklin child prostitution ring, had attended satanic rituals, and had pillaged Boys Town for victims.

Bonacci and John DeCamp pursued federal civil lawsuits against King. Bonacci was awarded a default judgement against King and was awarded one million dollars, based on the horrific events that Bonacci related in his testimony. US District Court Judge Warren Urbom wrote:

The now uncontradicted evidence is that the plaintiff has suffered much. He has suffered burns, broken fingers, beatings of the head and face and other indignities by the wrongful actions of the defendant King. In addition to the misery of going through the experiences just related over a period of eight years, the plaintiff has suffered the lingering results to the present time. He is a victim of multiple personality disorder, involving as many as fourteen distinct personalities aside from his primary personality. He has given up a desired military career and received threats on his life. He suffers from sleeplessness, has bad dreams, has difficulty in holding a job, is fearful that others are following him, fears getting killed, has depressing flashbacks, and is verbally violent on occasion, all in connection with the multiple personality disorder and caused by the wrongful activities of the defendant King.[5]

Larry King was the same kind of sick f*** Alan Baer was, except Larry King was more violent, uh, more sure of himself, ya know. I mean I would, ya know, see him f*** a 10 year old boy in the a**, ya know, until he bled and ya know, just pull out and stop and ya know, push him down, ya know, and then go out and, ya know, meet with decent people.

Wikipedia removed his page, and refuses to admit that the Franklin child prostitution ring existed.

King was released from prison after serving 10 of his 15 years. He is said to have relocated to Washington, D.C.[6]