Le Cercle meetings have had 307 known visitors since their first meeting in 1952. Since very few of the meeting lists have been leaked, this probably represents only a fraction of the total visitors. The Bilderberg has had almost 10 times this number of visitors.[1] 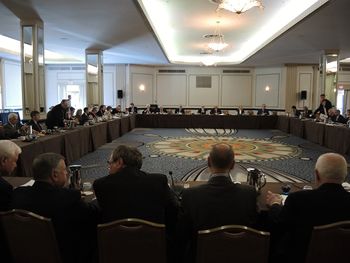 This image from the 2016 Cercle Meeting in Washington reveals very a large majority of male visitors (as used to be the case with the Bilderberg.

Typically, there is a "hard core" of regular members (c.f. the Bilderberg Steering Committee) and occasional guests who are invited only for consultation on a single topic.[2]

Most Cercle attendees have a hawkish orientation, which could be summarised as 'extreme right wing'. Many have been closely involved in establishing institutions to promote first "anti-communism" and later "counter-terrorism". These have been used to promote cold war paranoia and lay the ideological groundwork for a "global war on terror".[3]