"Let's Go Brandon!" is a slogan which arose in October 2021 from corporate media censorship of opposition to Joe Biden after NBC reporter Kelli Stavast attempted to mask vocal anti-Biden sentiment during an interview of Nascar driver, Brandon Brown[1]. Exemplifying the Streisand Effect, the phrase was quickly adopted as a shorthand for corporate media mendacity.[2] The BBC termed it an "anti-Biden conservative heckle".[3]

In 2021, as increasing evidence emerged of irregularities in the 2020 US election and dissatisfaction increased with the playing out of the COVID-19 project, sports fans adopted the tactic of repeatedly chanting "Fuck Joe Biden". On 2 October 2021 Kelli Stavast, interviewing Brandon Brown, attempted to censor the sentiment by suggesting that the chant was actually "Let's Go Brandon".[4][5] 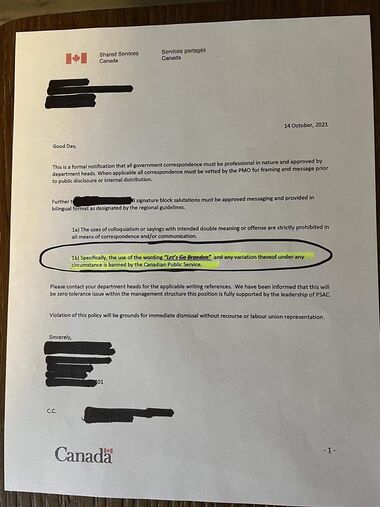 A memo dated 14 October 2021, purporting to illustrate an attempt by the

“the phrase and meme are fast becoming the most censored words of 2021, yet still entire stadiums of fans at sports games now regularly in unison shout Let's go Brandon ...even at high school or college games.”
(20 December 2021)  [6]

Canadian government to prevent use of the phrase "'Let's Go Brandon' and any variant thereof under any circumstance". Although of unverified authenticity, it was widely posted on the internet.[7] Given recent revelations about information campaigns of the Canadian military meant to influence public opinion, the question arises if the letter was possibly created by people from those psyop units.[8][9][10]

Kelli Stavast's failed attempt to recharacterize the crowd's chant quickly went viral, illustrating the Streisand Effect, as the phrase "Let's Go Brandon" was widely and creatively ridiculed.[3][11]. It became a focal point for further oppostion.[12][13] It was chanted for example by those opposing mandatory injection of staff with COVID-19 vaccines.[14] 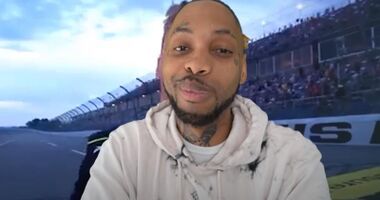 A screenshot from the rap song about the incident

Bryson Gray released a video about the event which became #1 on iTunes.[15][16] Later it was censored by YouTube on grounds of "medical misinformation".[17]