Licio Gelli was an Italian deep politician and fascist who ran Propaganda Due. 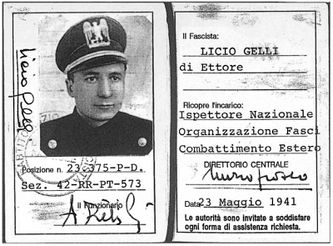 Vincenzo Vinciguerra states that Licio Gelli "worked for SIM, the Military Intelligence Services, during the war. He went to Yugoslavia, following Piero Parini. Gelli was a convicted Fascist. He took part in Italy's double-game in the Balkans where we fought Tito with the Germans and the Croats with the English. There he obtained certain secrets which meant that after the war he couldn't be marginalized. He went on to play in the big dirty game of Italian espionage. So his career developed within the framework of the secret services."[1]

Licio Gelli started the P-2 lodge in Italy, which was heavily involved in Operation Gladio. In this capacity, he reported to Umberto Ortolani.[2]