Liz Truss is a British Tory politician who lasted just 45 days as UK Prime Minister.[1] She was formerly Foreign Secretary and served in various cabinet positions under Prime Ministers David Cameron, Theresa May and Boris Johnson.[2]

On 20 October 2022, Liz Truss announced her resignation as Prime Minister, saying there would be a leadership election within a week.[4]

Truss worked as Chartered Management Accountant for Oil-kingpin Shell in 1999.[5]

“The Queen received in Audience The Right Honourable Elizabeth Truss MP today and requested her to form a new Administration. Ms Truss accepted Her Majesty’s offer and kissed hands upon her appointment as Prime Minister and First Lord of the Treasury.”[6]

“Kissing hands” is an old tradition which shows devout loyalty to the monarch by literally planting a kiss on their hand. The prime minister no longer actually kisses Queen Elizabeth’s hand, but the process of meeting the monarch and forming a government still has the same name.

Towering over the Queen

The picture provoked controversy on social media as Liz towers over the monarch, seeming like a giant next to the Queen who looks rather tiny. One person wrote on Twitter:

“How tall is Liz Truss? She looks like a giant towering over The Queen, who looks very frail and shrunken indeed.”

“Blimey! How small is the Queen these days?! I mean Liz Truss isn’t tall but looks like a giant here,” said another.

A third person added: “Not being funny but is the Queen tiny or is Liz Truss massive?”

“The PM is not tall so HM The Queen must be sooo small,” someone else tweeted. 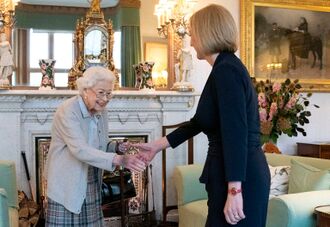 A number of online sources claimed that Liz Truss is 5 ft 3 in tall, which is 160 cm. According to reports, the Queen is also 5 ft 3 in. Other reports say the new prime minister is 5 ft 7 in, which makes a bit more sense, although we don’t know for sure.

On Twitter, many people were speculating that the monarch has shrunk a bit since she was last measured, which is a normal process of ageing. Perhaps she has lost a few inches, and Liz Truss was wearing some high nude stiletto heels in the photos, giving her some added height. If these measurements are correct and the Queen now stands at about 5 ft tall, that means she is very tiny, but Liz certainly isn’t freakishly tall. The most logical answer is that the stark height difference is all due to camera angles, with Liz appearing closer to the camera and Elizabeth standing further back.[7] 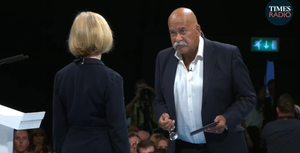 The Queen's last official act was to appoint Liz Truss as new Prime Minister, a decision with its own potentially worrisome nuclear implications. In a video, the Bulletin of the Atomic Scientists reminds us that at a hustings in August during the 2022 Tory leadership campaign, when asked by moderator John Pienaar whether she was prepared to unleash Britain's nuclear weapons and threaten global annihilation, Liz Truss replied:

"I think it's an important duty of the Prime Minister. I'm ready to do that.[8]

The threat of nuclear war has been rising since Vladimir Putin's invasion of Ukraine on 24 February 2022, heightening tensions among neighbouring NATO member states.[9]

Earlier this year, the Kremlin said Russia had been placed on nuclear alert after “unacceptable” comments by Liz Truss. It was not made clear what comments exactly Kremlin officials had taken offence to.

“Statements by various representatives at various levels about possible conflict situations and even collisions and clashes between NATO and the Russian Federation.

"We consider such statements absolutely unacceptable.

“I will not name the authors of these statements, although it was the British foreign secretary."[10]

On 13 February 2022, Mike Small wrote an article entitled "Leading the World" in Bella Caledonia, which began:

Self-doubt, like guilt, are useful emotions. They can be crippling but like everything in moderation they can be essential correctives too: ‘Can I do this?’ ‘Should I do this?’ ‘Should I have done that?’ Sadly Liz Truss seemed to have not a shred of self-doubt not a moment of Imposter-Syndrome as she arrived in Moscow representing us, however improbably, as Foreign Secretary.

While the Cabinet is riddled with truly ghastly bastards, awful sick people, none of them exude the sort of wanton uselessness of Truss who arrived into a scene of international crisis-diplomacy looking like a child waiting for someone to collect her from Lost and Found. She was completely unprepared, had no message, her tone and body-language were pitiful and she talked over the translators before blundering in basic Russian geography.

Left at the podium 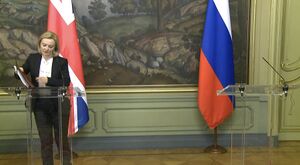 Left at the Moscow podium like a jilted bride

Sergey Lavrov left her at the podium like a jilted bride. There is the possibility that this was an expensive joke but Truss’s botched trip certainly made things worse in a situation of very high stakes. Ben Wallace was sent the next day to try and fix her mess.[12]

Liz Truss is the living embodiment of the Dunning-Kruger effect![13]

David Cameron faces a major challenge to his authority today as local Conservative Party activists meet to decide whether to sack a woman candidate, whom he had favoured, because she once had an extra-marital affair.

The battle raging inside the South West Norfolk Conservative Association between those who are for or against their new parliamentary candidate, Elizabeth Truss, is the most visible symptom of a power struggle between local activists – dubbed the "Turnip Taliban" – and Mr Cameron's "Notting Hill set".

The woman at the centre of it, a 34-year-old councillor from Greenwich, in south-east London, is exactly the type of candidate Mr Cameron wants to enlist to modernise the public image of the Conservative Party.

The product of a comprehensive school, who won a place at Oxford University, she is deputy director of the London think tank Reform, worked for big-name companies before turning to politics, and is a media-friendly woman in a notoriously male-dominated party.

By the end of today, she will either be a high-flyer with golden prospects of promotion in a Cameron-led government, or her political career will have taken a nose dive because she once strayed from the straight and narrow.

The fact that Ms Truss had had an affair with the Tory MP Mark Field when they were both married to others was well known in Westminster. Details could be found on the internet. But, as neither Ms Truss nor Mr Field were from the area, the news had not reached most members of the Norfolk South West constituency party, who found out from a Sunday newspaper the day after they had chosen Ms Truss as their parliamentary candidate.

Mr Cameron's personal authority is on the line because he has not only praised and supported Ms Truss in public but it was even revealed that he had rung a senior member of the local association, Sir Jeremy Bagge, in an attempt – albeit in vain – to enlist his support and prevent Ms Truss facing deselection.

"I have absolutely nothing against her as an individual. I voted for her and what she got up to four years ago doesn't concern me. What concerns me is Conservative Central Office, the headquarters, failed to actually advise us that we could be subjected to embarrassment, which we have been subjected to."

Sir Jeremy said that when concerns were raised that Ms Truss had not mentioned her affair in her selection interview, the national party responded that the panel could have found out about it by putting her name into Google. "I get seriously upset with regard to their general arrogance," he said. "In my view it is deceit. They have betrayed us as an association and they have also betrayed Ms Truss as a candidate."

The association's chairman, David Hills, who initially sought Ms Truss's deselection, is now understood to have thrown his support behind her. Party officials are reported to have threatened the local association that they would have an all-women shortlist imposed on them at their next selection if they removed Ms Truss.

In a departure from normal procedure, local party members were not told who was on their shortlist before the selection meeting on 24 October, so they had no chance to research the candidates' backgrounds. Ms Truss easily won the selection on the strength of her performance on the day.

It is also rumoured that party staff had arranged that, at the meeting, the candidates would be asked whether there was anything in their private lives that should be told, in order to give Ms Truss the opportunity to clear the air, but that the person who was supposed to ask the question did not do so.

In 2005, Ms Truss was chosen to fight Labour-held Calder Valley as a last-minute replacement for Sue Catling, who was accused of having an illicit affair with a fellow Tory. She probably would not have been selected if the Calder Valley party had known about her affair with Mark Field, which had not then become public.

The row is just one symptom of the friction within the Conservative Party, as Mr Cameron's determination to use the selection procedure to modernise the party comes up against the cherished independence of local associations. A public row erupted last month when the party chairman, Eric Pickles, was accused of trying to intervene in the selection procedure in Congleton, Cheshire, where the Tory MP, Sir Nicholas Winterton, is stepping down after 29 years. It is alleged that he tried to have the shortlist lengthened to include Matt Hancock, who is chief of staff for the shadow Chancellor, George Osborne.

Mr Cameron came close to provoking a major rebellion in the shires last month when he told a Commons committee that, from January, the party would introduce all-women shortlists in some constituencies to increase the number of women MPs. His words were a reaction to the fact that the previous eight candidates chosen in winnable Tory seats were all male, and that male Tory candidates outnumber women by more than two to one.

The Labour Party introduced all-women shortlists 14 years ago but the idea has been bitterly opposed in Conservative circles, not least by eminent women Tory MPs such as Ann Widdecombe and Nadine Dorries.

It has long been alleged that rural Conservative Associations are full of people who do not think women should be in Parliament at all, but expect to get two for the price of one when they select a male MP with a wife who is prepared to help out in the constituency, and that they are doubly horrified by the sight of a professional woman who has admitted to having an extra-marital affair. Another accusation is that Tories in rural seats do not trust candidates from the metropolis.

Ms Truss's marriage to Hugh O'Leary, a finance director, survived the affair and, she says, became stronger. They have two children.

Mark Field's position as an MP has not been affected by the revelation of his affair with Elizabeth Truss, although in 2006 his marriage broke up and, in the same year, his hopes of being a government minister faded. The son of an Army officer, he entered Parliament as MP for the City of London and Westminster in 2001, at the same time as David Cameron and George Osborne, and kept pace with them by being promoted to the Tory front bench as shadow minister for culture after only two years.

But he did not get on with David Cameron as party leader and he was dropped in 2006. He has been a backbench MP since. His affair with Ms Truss began in 2004 and lasted several months. His first marriage ended in divorce in 2006. He has since married the celebrity agent Victoria Elphicke.[14]

A Document by Liz Truss