Liz Wahl is/was a member of the Institute for Statecraft, although her name is not known to have appeared on the list of fellows. She resigned on air from RT in 2014. One possibility is that she joined the channel in order to infiltrate it; her family background might give an indication.

Wahl was born at the U.S. Naval Base Subic Bay[1] in the Philippines to a Filipina mother[1] and a Hungarian American father who worked in the military. She was raised in Connecticut. She graduated from Fairfield University.[2] Her paternal grandparents were refugees from Hungary, who fled the on-coming Soviet invasion during the 1956 Hungarian Uprising.[3][4]

She is the wife of a military base physician.[5]

Liz Wahl was a correspondent and anchor for the U.S. branch of RT from 2011 to 2014. Following her on air resignation, she denouncing its coverage of the conflict in Ukraine and Russian intervention in Crimea. She joined the Institute for Statecraft, in which capacity she wrote for Stopfake that “while the few experienced journalists on the [RT] staff aimed to be fair and objective, there was constant pressure from the top to deviate from accuracy to deliver an anti-American and anti-Western narrative.” [6] 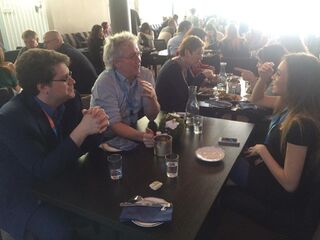 In March 2016 the Integrity Initiative paid her £633 for a paper entitled Inside RT, according to accounts which leaked online.[8]