Michael Ashcroft, Baron Ashcroft is a former deputy chairman of the Conservative Party who founded Michael A. Ashcroft Associates in 1972 and[1][2] is the 74th richest person in the UK, as ranked by the Sunday Times Rich List 2015, with an estimated fortune of £1.32 billion.[3]

He sat on the Conservative benches of the House of Lords until 2015, having been ennobled as a life peer in 2000. His peerage was controversial due to his status as tax exile.[4] The Cabinet Office stated that he would take up permanent residence in the UK for tax purposes, however it was revealed a decade later that he had not done so.[5]

Ashcroft holds dual British and Belizean nationality, and is a belonger of the Turks and Caicos Islands.[6]

Lord Ashcroft Polls published detailed analyses of the turnout from both the 23 June 2016 EU Referendum and the 8 June 2017 General Election. The most glaring statistic revealed by these two votes is that whereas Males and Females voted identically in the EU Referendum (52% Leave and 48% Remain), they were clearly split in the General Election: 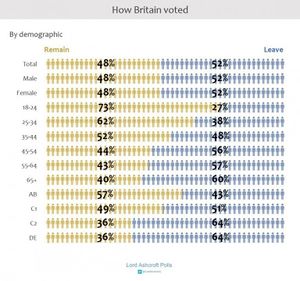 Analysis of the 2016 EU Referendum vote

On 24 June 2016, Lord Ashcroft Polls published this analysis of the EU Referendum turnout:

The UK has voted to leave the European Union. On referendum day I surveyed 12,369 people after they had voted to help explain the result – who voted for which outcome, and what lay behind their decision. 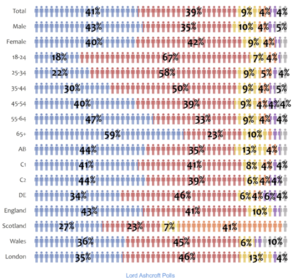 Analysis of the 2017 General Election vote

I surveyed over 14,000 people on election day who had already cast their vote to help understand how this unexpected result came about. My poll came very close to reflecting the outcome of the election, with 41% saying they had voted Conservative, 39% Labour, and 9% voted Liberal Democrat (the result in Great Britain has been 43% Conservative, 41% Labour, 7% Lib Dems). The survey found two thirds of those aged 18 to 24 saying they voted Labour, as did more than half of those aged 25 to 34. Voters aged over 55 broke for the Tories.

Labour voters made their minds up much later in the campaign than those who backed the Tories. More than half (57%) of those who voted Labour made their decision in the last month, and more than a quarter (26%) in “the last few days”. Conservatives were more likely to have known how they would vote before the campaign started.

Voters who made up their minds towards the end of the campaign were more likely to vote Labour than Conservative.

The survey found that 82% of those who voted Conservative in 2015 did so again yesterday, with one in ten switching to Labour and one in twenty going to the Lib Dems. Meanwhile, 83% of 2015 Labour voters stayed with their party, with only 9% going to the Conservatives. Half of those who voted Lib Dem last time round did so again this time, as did eight in ten SNP voters. Just over half (57%) of UKIP voters said they had switched to the Tories; fewer than one in five (19%) said they had stayed with their 2015 parties.

Seven in ten Conservative voters said they wanted Brexit to happen as soon as possible. Only 33% of Labour voters said the same; 43% said they would still like to prevent Brexit from happening if possible, as did more than half (56%) of Liberal Democrat voters.

Presented with a list of reasons which might have been behind their vote, Labour, Lib Dem and SNP voters said the most important factor had been that they trusted the motives of the party they chose; next, that they had preferred that party’s promises. Conservative voters had different priorities: their most important reason was thinking the party or its leader would do a better job of negotiating Brexit; followed by the belief that Theresa May would be the best Prime Minister.

Asked unprompted which issues had been the most important in their voting decision, Conservatives were most likely to name Brexit (as were Liberal Democrats), followed by having the right leadership. Labour voters, meanwhile, were most likely to name the NHS and spending cuts. Only 8% of Labour voters named Brexit as the most important issue in their decision, compared to 48% of those who voted Conservative.[9]