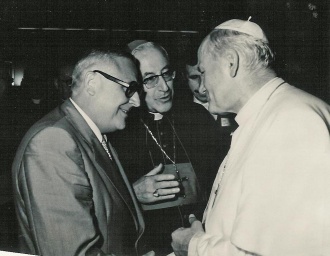 Marcel Clement was a philosopher, writer, scholar, journalist, editor and French teacher. He was a professor of philosophy who specialised in the social doctrine of the Church. He was an editor of the Catholic newspaper L'Homme Nouveau from 1962-1998. He promoted of Ultramontanism (a Catholic belief found that emphasised the prerogatives and powers of the Pope) and said to have influenced a generation of Catholics.[2][3]

He is the brother of Andrew Clement, founder of the Faculté Libre de Philosophie Comparée in Paris. He is the father of Pascal Clement, politician and former minister of justice in the cabinet of prime minister Jean-Pierre Raffarin and uncle of Francis Xavier Clément, philosopher, diocesan director of Catholic Education of the Loire. Among the books he wrote was the 1960 book 'Le Communisme face à Dieu: Marx, Mao, Marcuse.'[3]