Dr. Martin John Rogers was a scientist working on tropical diseases, particularly malaria, at the world-renowned research center near Washington, D.C. He worked under Dr Beverly Fenton Hall in the Parasitology and International Programs Branch of the National Institutes of Health. He had worked there for 15 years. He lived in the 12900 block of Riffle Ford Court in Gaithersburg, Maryland, USA. One day he failed to turn up for work and he was found dead a couple of weeks later not far from his wrecked car. 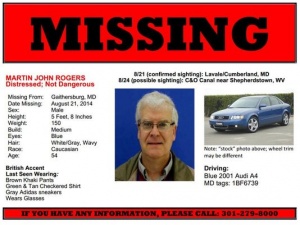 Rogers, 54, was last seen by his wife of 25 years, Kelley, on August 21st around 7:30 a.m. when he left their home in Darnestown, Maryland. As he was leaving, he told her that he was going to a meeting. However, he never showed up at work.[1]

His wife said "This is like a bad dream that you read about in the newspaper, and if you tried to pick someone that would wander off like this and disappear, you would never pick my husband".[2] His brother, Dr. John Conner, stated "The detective working on the case has found 583 missing people in his career. He told us that why a person leaves often helps them find out where they went, but when the detective went through all the normal reasons a person leaves — money problems, work problems, trouble at home, a girlfriend — none of that matched John."[3] Sandra Thomas, a spokeswoman for the family stated "This doesn’t fit the missing persons case and that makes it more difficult to investigate. He didn’t have a reason to leave his family that anyone can discern."

Police were contacted and after issuing a missing notice, they reported several sightings. The most recent sighting reported was around 8:20 a.m. on August 28th in the area of Edwards Ferry near Poolesville and Violettes Lock near Darrenstown, police stated on August 29.[4]

Rogers was captured on surveillance video when he checked into a hotel in La Valle, Maryland. Police stated that he looked "stressed out",[2] while Sandra Thomas, a spokeswoman for the missing man's family stated that he "appears to be sweating profusely, shaking and pacing back and forth in video footage from the Super 8 Motel on National Highway".[5]

Authorities[Who?] say a passing motorist called in an abandoned vehicle in a hilly, rural area[6] in Allegany County. Maryland State Police investigated and found Rogers dead, a short distance away from his wrecked car down an embankment in western Maryland. Authorities did not say how they think Rogers died, and the body was sent to sent to the Chief Medical Examiner[Who?] in Baltimore for confirmation of identity.[7] An autopsy will be performed to determine the manner and cause of his death.[2] Police were quick to announce that they did not suspect foul play. The Washington Post reported that he "was found dead Sept. 4 after an apparent car accident".[8]

Rogers may have discovered something that others wished he would keep secret - which would correlate with a number of other untimely deaths of medical researchers. On the other hand, he appears to have had both the time and opportunity in which to blow the whistle, but is not known to have done so. Some have suggested that he may have quarantined himself after performing a medical experiment on himself,[9] others noting that many virologists have been killed or suicided.[10]