Face masks were a relatively obscure phenomenon before the COVID-19 event started in March 2020; mainly used by doctors during surgery, in medical settings and somewhat popular in East Asia, mostly against air pollution. No studies of long term or widespread use of face masks had been done, for the simple reason that none of the research done suggested they significantly affected virus transmission. 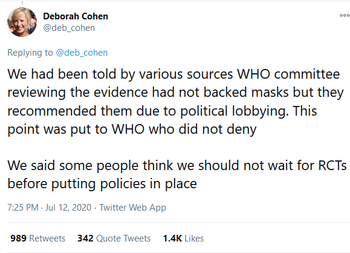 US Surgeon General reminds the public not to buy face masks.

At the start of 2020, the official narrative about face masks was they were useful protection against air pollution, but had no impact on virus transmission. This was in line with the scientific literature and echoed by numerous public pronouncements from "experts" such as Fauci.

A sudden shift in the longstanding guidance occurred in March 2020 occurred due to "political lobbying" by unnamed forces.[1] Studies appeared claiming that face mask use could reduce the spread of Covid-19 by 75%.[2][3][4][5][6]

In November 2021 Rochelle Walensky, CDC director, made the unreferenced claim that “Masks can help reduce your chance of #COVID19 infection by more than 80%.” [7]

The corporate media have promoted the idea that children love wearing masks for hours at school.[8] 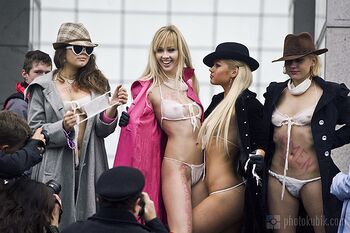 In 2009 the Ukrainian activist group FEMEN organized street protests aimed at reducing public stress brought on by a flu epidemic by wearing underwear made from masks.[9] 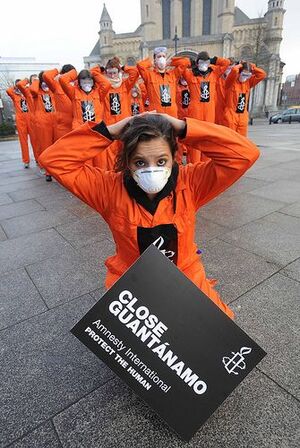 Like the concept of lockdown and other parts of the COVID-19 psychological operation, the idea of forcing everyone to wear a face cover originates in the military/prison complex. Here from a 2008 demonstration protesting torture in the Guantanamo concentration camp.[10][11]

The idea caught on and has multiple aspects, some of which are not fully understood, and might imply careful planning as part of a broader operation.

After 2020, corporate media and some governments started pushing the idea that several layers of masks would be even more "effective"

WHO policy until 2020 did not recommend the general public wear masks of any kind, until a bout of "political lobbying" in Spring 2020.

In July 2021, Mayor of Washington DC Muriel Bowser announced a new mask mandate for everyone over 2 years old.[14]

A pressing issue in American schools. The Williamson County Schools Board of Education in Tennessee voted to require masks for students, staff and visitors inside and on school premises. Parents are angry.[15]

As of October 2021, face masks are optional in schools in England and Wales, but compulsory in Scotland.[16]

In the UK/Parliament, masks are mandatory for all employees and staff except for MPs.[17]

In November 2021, the Guernsey government voted against mandatory face coverings.[18]

Germany abandoned mask mandation on 2022-04-03.[citation needed] Vaccine stations were partially closed due to a lack of interest in the population. [19] 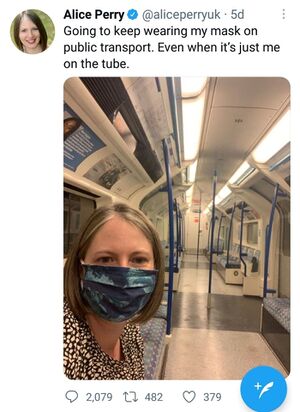 A Labour Party councilor virtue signals on Twitter and gets ratioed hard. 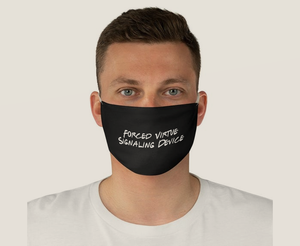 Masks have been used as a form of Virtue signalling.

Mask wearing is a hindrance to inter personal communication and empathy and it reduces both; masks slightly muffle ordinary speech, and facial expressions carry a lot of information, which is lost by mask wearing. 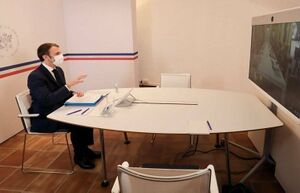 Emmanuel Macron wearing a mask alone on a video conference

Mask wearing allows feel happy to be part of the crowd who are striving to "fight" COVID, especially where mask wearing rates are high. They refuse to hear evidence about the ineffectiveness of masks in part because they don't want to admit that they were tricked (as with other false flag attacks). Society has used fearmongering to normalise face masks, at the expense of human interaction.

Mask wearing is an important ritual to psychologically unite isolated and fearful citizens into a crowd. Mask wearers, by instantly recognising other mask wearers, draw psychological comfort, just as they are programmed to feel aggression to and fear of dissidents.

Well informed citizens can be expected not to wear masks, so mandating them becomes a means to identify COVID dissidents. This promotes their scapegoating of COVID dissidents 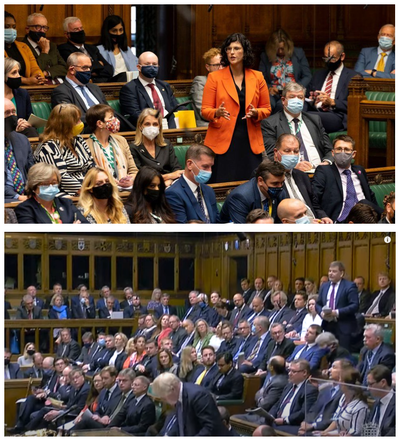 Various leaders or leading groups have seen fit to exempt themselves from mask wearing, generally just de facto. This underlines their superior status.

On 18 August 2021, the UK Parliament was recalled due to the situation in Afghanistan; particularly the Afghanistan/2021 withdraw. The BBC noted that most Conservative Party MPs did not wear face masks despite it being under government public health guidelines. 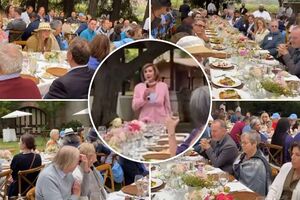 In August 2021, Speaker of the House Nancy Pelosi (D-CA) held a speech for wealthy Democratic donors in Napa, California, being filmed sitting maskless virtually on top of one another. The "delightful event" was held just five days after the Democratic county government of Los Angeles imposed a countywide mask requirement for “major outdoor events.”[20][21] 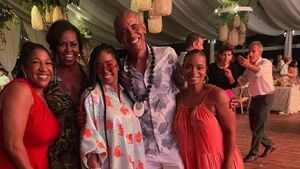 In August 2021, former President President Obama celebrated his 60th birthday party at his $12 million weekend estate on Martha’s Vineyard. Over 400 of his closest maskless friends spent hours in indoor tents dancing, chatting in close circles, and yelling in each other’s ears over the live music. New York Times reporter Annie Karni defended the masklessness: It "is really being overblown. They’re following all the safety requirements. People are going to sporting events that are bigger than this. This is going to be safe. This is a sophisticated, vaccinated crowd and this is just about optics. It’s not about safety."[22] 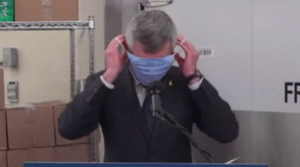 Also health officials are only wearing them for show. When Canadian Paul Wynnyk, chair of Alberta’s COVID-19 vaccine task force, tried to put on a mask at a press conference, this was the result.[23]

In stunning display of power structures, the governing class openly ignores mask use themselves, while requiring the serving staff around them to wear them. For example at the G7 summit in Cornwall in June 2021, the leaders, including the elderly Queen Elizabeth, practiced "social distancing" and masking in briefly public, while not doing so in private.[24]

In a September 2021 gala event, a maskless Representative Alexandria Ocasio-Cortez, who likes to present an image of being progressive, wore a designer dress embossed with "tax the rich", while the serving staff around her had to wear masks.[25]

In October 2021, Conservative MPs are still not wearing masks. Opposition MPs are calling on them to set an example.[26]

there were no images of Bill Gates wearing a face mask until October 2021, when he was pictured on a few occasion with one.

As Swiss Policy Research pointed out "for decades, studies have shown that face masks don’t work[30] against respiratory virus epidemics. But with the onset of the coronavirus pandemic and increasing political pressure, suddenly studies appeared claiming the opposite. In reality, these studies were a mixture of confounded observational data, unrealistic modelling and lab results, and outright fraud. The most influential fraudulent study certainly was the WHO-mandated meta-study published in The Lancet[31]." 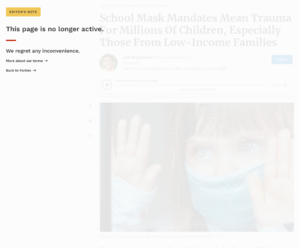 In the summer of 2020, numerous corporate media outlets exploited false reports that French “mask opponents” had killed a bus driver in Bayonne[49][50] to depict opponents as violent fanatics. In reality, the attackers were petty criminals who rode without a ticket; the incident had nothing to do with masks[51]. No media outlet is known to have published a correction. 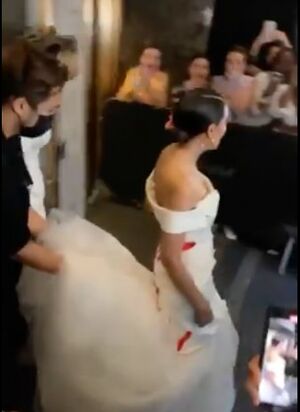 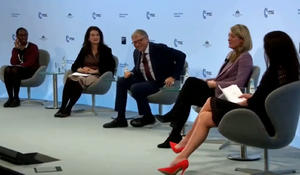 At a 2022 high level conference a conspicuously maskless Bill Gates jokes "what is the big deal about wearing a mask?"[video]

In June 2020, the German Dr. Ronny Weiklrecorded a video in which the medical profession was asked not to look away, but to issue an exemption certificate if there were health problems when wearing a mask. As a result, many patients, including many children, came to Weikl's practice week after week, some of whom had huge complaints in connection with wearing masks, and therefore asked for a certificate of exemption. Around 1,000 exemption certificates were given by mid-December. On December 16th, 2020, the police completely unexpectedly carried out a search of his practice and home on suspicion of “issuing incorrect health certificates”. 10 police officers from a special task force searched the practice and his home for several hours, confiscating numerous documents, in particular IT equipment. In autumn 2021, the public prosecutor's investigations were completed and charges were brought against Weikl. He was forced to set up a strong but costly legal team to defend himself against these allegations and to prove his innocence. He also suffered a massive defamation campaign by [[corporate media]. If he is found guilty, the judgment will be used as a precedent for many other doctors who also were raided because of giving too many mask certificates and who are accused of similar things.[56]