Corporate media is de facto censored, as reflection upon the contents of this website should demonstrate, a phenomenon which has increased significantly in the last 50 years.[1] As the internet is facilitating ever more widespread sharing of diverse opinions, this is becoming clearer to many people. Faith in corporate media is much lower than in the pre-internet era, and is continuing to sink.[2]

A large proportion of corporate media ouput concerns topics such as sports, celebrities, gossip etc. Issues of social significance receive a more cautious treatment that reflects the regulating group mind of journalists, pundits and spokesmen (very commonly with institutional affiliations) - parties who can be counted on to limit their opinions to respect the unspoken censorship that is the hallmark of corporate media output. The first strategy for handling figures who tackle unwanted topics or who express undesirable opinions is simply to ignore them (for example, the corporate news blackout of Rev. Kevin Annett). For those who nevertheless manage to achieve such prominence that ignoring them altogether would itself attract attention, there is the catch all designation of "conspiracy theorist", routinely applied to describe anyone whose ideas challenge to the official narrative. The archive section of Media Lens gives numerous trenchant examples of this content policing process in action.[3]

In the 21st Century, the "War on Terror" is the foremost example of the supine nature of the corporate media; almost all TV and newspapers have uncritically parroted authorities' official narratives about "terrorism" which blame "Muslim extremists", ignoring the evidence that most such acts are in all likelihood initiated by Western spooks waging a strategy of tension on the populace. Big media's assistance in the campaign to terrorise of the populace is most evidence in USA, where a 2016 investigation found that "nearly half of all Americans (48%) said they were “worried a great deal” about terrorist attacks in the US."[4]

While official narrative-friendly topics such as party politics are encouraged, deep politics is forbidden. Some deep events are reported, connections to other events are obscured and misleading connections and inferences often drawn. Inherently threatening topics such as false flag attacks are more or less forbidden, and are the subject of 'hit pieces' which introduce deliberately flawed 'strawman arguments' so they can be easily knocked down. 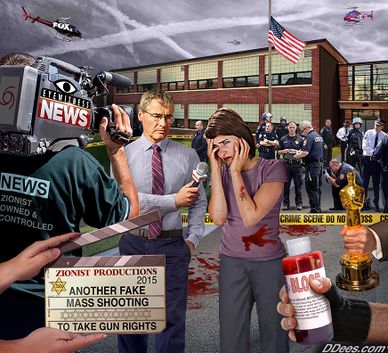 After the 1982 interview in which whistleblower Christopher Boyce exposed the CIA's role in the 1975 Australian coup d'état‎, Boyce's revelations were subject to a news blackout by corporate media.[5]

Large scale false flag attacks would not succeed without the backing of corporate media. The media response to 9-11 is an illustrative example of how, since 2001, big media treats false flag attacks. Footage of the destruction of WTC 1 & 2 was repeated dozens of times daily by some channels, but the collapse of WTC7 was not aired after the day by any corporate media outlet for many years. Reporting of other aspects of that day was similarly selective.

The general pattern of controlled media reporting is to ignore events to the extent that they contradict the official narrative. Sometimes this can mean initial interest in a story which declines if facts emerge which do not fit the official story. For example, the Amerithrax case was widely reported at the time since it promoted fear fitted the story about "Muslim terrorists". When several years later it was pinned on Bruce Ivins, a "lone nut" US scientist who had just killed himself, big media didn't have much to say on the topic. Big media was silent when in 2015 Richard Lambert, the FBI veteran who headed up the $100M investigation into this attack, sued the FBI, alleging that they had covered up evidence which could have proved Ivins' innocence.[6] 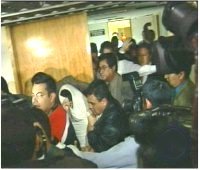 "Two Israeli terrorists are escorted out of the Mexican Congress"[7]

Another follow on event from 9-11 was a 3rd rail topic from the outset; the 2001 Mexican legislative assembly attack saw two heavily armed Israelis break into the Mexican parliament. Although big news for a short period in Mexico, was never been reported by Western media. Failed false flag attacks received little to no coverage by commercially-controlled media.

In spite of a mound of evidence (first presented by Gary Webb) the corporate media establishment has never faced the facts that the CIA deals drugs on an international level, and uses the profits to fund black operations. This requirement to 'disconnect the dots' makes reporting on deep events fragmentory and sometimes even non-existent. Big media has had almost nothing to say about the 2006 Mexico DC-9 drug bust or the 2016 flight of Western Global Airlines N545JN. Analyses of the global drug trade never analyse the role of deep state groups who more or less control the large players.

Matters of real significance are often obscured behind related but ultimately irrelevant facades. Mark Crispin Miller has observed, for example, that corporate media is allowed to discuss the voter suppression (disenfranchising large groups of voters whether by law or otherwise), but that electoral theft by software is a third rail topic, which challenges the idea that readers must take the establishment on trust. Jonathan Simon clarified that discussion of vote theft “would through a lurid light of distrust and disbelief onto our entire electoral system, political system and basically our democracy” [8].

If revelations render an official narrative untenable, a range of official opposition narratives are generally ready as a fallback. Debate does happen about whether, say, US/UK/NATO made a "mistake" in attacking Iraq, the good intentions of authorities are rarely called into question.

Anyone challenging Israel who is not a jew is liable to charges of "antisemitism".[9] For example, reflect upon the treatment of Stephen Sizer or Kees van der Pijl by the commercially-controlled media after they linked to the "9-11/Israel did it" page of this website.

8 November 2017 Robin  An important but brief article
This article gives a good overview, but lacks examples.