Michael Jon Hand (a.k.a. Michael Fuller) is a fugitive from Australian law after setting up the Nugan Hand Bank for the CIA. This was involved in money laundering and financial fraud until it collapsed leaving investors about $50 million out of pocket.

In 1965, Hand was in a small contingent of Special Forces troops dispatched to Dong Xoai on the Ho Chi Minh Trail. In June, Hand's outpost came under fierce Viet Cong attack. This was free-fire warfare without constraint. Only six of the 19 Americans survived. Hand saved four of them. He was awarded a Distinguished Service Cross, America's second-highest bravery award. Out of bullets, Hand killed several people with a Ka-Bar combat knife and his bare hands. Bill Colby had run one the programs which used Michael Jon Hand.[1] CIA spook Theodore Shackley also acknowledged meeting Hand during this period.[2]

In September 1967 Hand moved to Australia, where he found work in real estate, selling development lots.[3] In 1969, Hand formed his own development company, which soon began doing business with Australian lawyer Francis John Nugan.[4] In 1973 Hand and Nugan founded the Nugan Hand Bank, with Hand concentrating on the international side of the bank. In January 1975 Hand spent over a year in southern Africa seeking to arrange arms deals, at a time when the CIA was providing support to groups such as UNITA in Angola. Efforts to arrange deals included incorporating a company in Pretoria, South Africa, and sending Bernie Houghton with two Nugan Hand employees to the United States to meet deep state arms dealer Edwin P. Wilson.[5]

Returning to Sydney in March 1976, Hand developed "a close business and social relationship with [Murray] Riley", a former policeman turned criminal patron of leading Australian criminals. Within a month of his arrival, Hand began transferring cash to Nugan Hand's Hong Kong branch on Riley's behalf. Australian police later concluded that "Throughout 1976 Hand was knowingly involved in drug activity with the 'Riley' group in that he permitted and even encouraged the use of Nugan Hand facilities for the movement of 'drug' money."[5] Following the June 1976 incorporation of a bank branch in the Cayman Islands, Hand moved to Hong Kong in October 1976 to develop the international side of the bank, developing a network of 12 branches across three continents.[5] In 1977-8, as the bank expanded dramatically, Houghton was able to use his connections to bring a range of US military and intelligence figures to the bank.[5] This expansion and influx of links coincided with the collapse of the CIA-linked Castle Bank & Trust in the Bahamas.[5] In August 1977 Hand moved from Hong Kong to Singapore, from where he managed Nugan Hand's international operations until its collapse in 1980.[6]

The bank collapsed with $50M debts and became a byword for criminality after Francis John Nugan was found dead. Michael hand fled and his whereabouts were uncertain for decades.

Hand then fled Australia under a false identity, that of a Sydney butcher named Alan Glenn Winter, on a flight to Fiji in late June 1981. Hand wore a false beard and mustache to look like Winter and obtained a passport after getting Winter's birth certificate and having two photos taken. After a week in Fiji he made his way to Vancouver, British Columbia, and then on to New York City.[7] 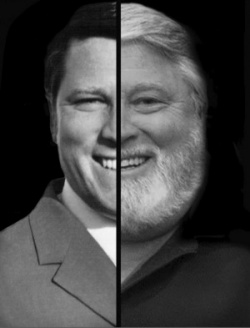 A composite photo showing the 'old' and 'new' faces of Michael Jon Hand side by side.

"The fact that Hand has been allowed to live the free life in the United States suggests that he belongs to a protected species, most likely of the intelligence kind. Indeed, an intelligence document I found places Michael Hand back working for the CIA in Central America 18 months after his disappearance." Hand reportedly manufactures tactical weapons for US Special Forces, special operations groups and hunters.[8]

After a mention in Merchants of Menace by Peter Butt mentioned Hand's residence and pseudonym, on November 9th, 2015, the Sydney Morning Herald reported that Michael Hand was living under the name of 'Michael Fuller' in Idaho.[8]