Michael A. Ledeen has been described by the Jerusalem Post as "Washington's neoconservative guru". He was part of the neocon cabal that manufactured the fake intelligence in the lead up to the war against Iraq, and has since been active in making the case for the bombing of Iran. He was involved in "Iran-Contra".[2]

Ledeen was was a founder and former member of the Board of Advisors of the Jewish Institute for National Security Affairs. He resigned his position following the sacking of its executive director and pro-Israeli Hawk Shoshana Bryen in 2012 [3]

According to James Bamford, "His father designed the air-conditioning system for Walt Disney Studios, and Ledeen spent much of his early life surrounded by a world of fantasy". His latter life has been equally surrounded by fantasy, as Ledeen has been responsible some of the wilder claims about first the Soviet threat, and now the Islamic threat. Ledeen was a senior researcher at the CIA-affiliated think-tank CSIS in the 1970s. [4]

Ledeen taught in Rome for two years until 1977 and was involved in smear operations against the Italian Communist Party. In 1976 when a day after a CSIS conference on Italy the New Republic published an article by Claire Sterling and Ledeen claiming that the Italian Communist Party had received secret funding from the Soviets. The New Republic was at that time published by Robert J. Myers, a friend of Ray Cline of CSIS, and formerly of the CIA. [4] Myers appeared with Cline a January 1978 congressional hearing on the CIA and the media where he stated: "The reciprocal relationship between the CIA and the American press has been of value to both parties and often to the individuals themselves whose careers may have mutually benefited by such connections." The article was republished just before the elections by the Rome Daily American (which was funded by the CIA). Claire Sterling and Ledeen even appeared on Italian television on the night of the election. They featured as commentators from 4pm to 2am on Channel 1 which was controlled by the Christian Democrat Party - the main recipient of CIA funds in Italy. [4]

In 1977, after earning a Ph.D. in history and philosophy and teaching in Rome for two years, Ledeen became the first executive director of the Jewish Institute for National Security Affairs, a pro-Israel pressure group that served as a flagship of the neoconservative movement.

In 1980, while working as Rome correspondent of The New Republic, allegedly collaborated with right-wing Italian intelligence officers on a series of black propaganda operations.

The first of these involved a scandal sparked when Jimmy Carter's brother Billy accepted a $220,000 loan from Libya. The controversy had largely died down by the time of the election.

Then, in the last week of October 1980, just two weeks before the election, The New Republic in Washington and Now magazine in Great Britain published a story co-authored by Michael Ledeen and Arnaud de Borchgrave, now an editor-at-large at The Washington Times and United Press International. According to the story, headlined "Qaddafi, Arafat and Billy Carter," the president's brother had been given an additional $50,000 by Qaddafi, on top of the loan, and had met secretly with Palestine Liberation Organization (PLO) leader Yasser Arafat. The story had come dramatically back to life. The new charges were disputed by Billy Carter and many others, and were never corroborated.

A 1985 investigation by Jonathan Kwitny in The Wall Street Journal reported that the New Republic article was part of a larger disinformation scam run by Ledeen and SISMI to tilt the election, and that "Billy Carter wasn't the only one allegedly getting money from a foreign government." According to Pazienza, Kwitny reported, Michael Ledeen had received at least $120,000 from SISMI in 1980 or 1981 for his work on Billygate and other projects. Ledeen even had a coded identity, Z-3, and had money sent to him in a Bermuda bank account, Pazienza said.[5]

In 1981, Ledeen played a role in what has been widely characterized as another disinformation operation. Once again his alleged ties to SISMI were front and center. The episode began after Mehmet Ali Ağca, the right-winger who shot Pope John Paul II that May, told authorities that he had been taking orders from the Soviet Union's KGB and Bulgaria's secret service. With Ronald Reagan newly installed in the White House, the so-called Bulgarian Connection made perfect Cold War propaganda. Michael Ledeen was one of its most vocal proponents, promoting it on TV and in newspapers all over the world.[5]

A few years later, after Ronald Reagan was elected, Ledeen had become prominent enough to earn a spot as a consultant to the National Security Council alongside Douglas Feith. There Ledeen was involved in the Iran-Contra scandal where he served as 'the administration's intermediary with Israel in the illegal-arms deal'. 'In 1985, he met with Manucher Ghorbanifar, a one-time Iranian carpet salesman who was widely believed to be an Israeli agent. The CIA considered Ghorbanifar a dangerous con man and had issued a "burn notice" recommending that no U.S. agency have any dealings with him. Unfazed, Ledeen called Ghorbanifar "one of the most honest, educated, honorable men I have ever known." The two men brokered the arms exchange—a transaction that would result in the indictment of fourteen senior officials in the Reagan administration.

Promoting the "War On Terror"

He attended the 1984 Washington Conference on International Terrorism.

Ledeen organised a series of meetings in an apartment in Rome, Italy from December 10, 2001 through December 13 2001.

The meeting included Larry Franklin (Office of Assistant Secretary of Defense, International Security Affairs), Harold Rhode (Office of Net Assessments), Michael Ledeen (former Office of the Secretary of Defense and National Security Council consultant), Manucher Ghorbanifar (Iranian exile), [Iranian #1] (Iranian living in exile in Morocco), Iranian #2] (Iranian Revolutionary Guard Official), and an unidentified employee of [a foreign government]. Michael Ledeen arranged the meeting with the help of his contacts in Italy and [the foreign government] who provided the meeting place and the logistical support.[6]

The US Senate Intelligence Committee issued a report on the meetings and subsequent events in 2008, which concluded:

The role Mr Ledeen played as interlocutor for Mr Ghorbanifar and in setting up the Rome meeting, and potentially the Paris meeting, was inappropriate. There is no indication that the Iranian officials attending the Rome meeting refused to meet with CIA officials. It is likely that this allegation was used by Mr. Ledeen, Mr. Ghorbanifar or others as a means of circumventing the Intelligence Community's knowledge of and involvement in the meeting given the CIA's fabrication notice against Mr Ghorbanifar. Also, Mr Ghorbanifar, aided by Mr Ledeen, used the opportunity presented at the Rome meeting to propose an agenda for "regime change" in Iran directly to DoD officials, including a proposal for U.S. funding of covert activities.[6]

“Creative destruction is our middle name. We do it automatically.... It is time once again to export the democratic revolution.”
Michael Ledeen[citation needed]

“Every ten years or so, the United States needs to pick up some small crappy little country and throw it against the wall, just to show the world we mean business.”
Michael Ledeen [1] 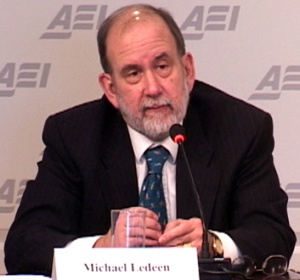