Michael Lynch, known as Mick Lynch, is a British trade unionist who has been the General Secretary of the National Union of Rail, Maritime and Transport Workers (RMT) since May 2021.[1]

Mick Lynch was born to Irish parents in London in 1962 and grew up in the Paddington area.[2] He left school at the age of 16 and qualified as an electrician.

Mick Lynch worked in construction and joined a trade union, but found himself illegally blacklisted as a result. In 1993, unable to find work in construction, he began working for Eurostar, and became active in the RMT. Twenty years later, he received a large settlement for the illegal blacklisting.[3]

As part of the media coverage of the RMT's 2022 strikes, Mick Lynch gained widespread attention for his performances in interviews and debates on the BBC, Sky News and ITV[6]

The pundits and politicians facing him off adopted the curious position that unions are the real enemy of the worker, framing the RMT as intransigent dinosaurs holding rail-reliant ‘ordinary people’ to ransom. But who, exactly, are ordinary people? Rail workers could well be joined by teachers and nurses later this year if public sector pay and conditions don’t improve. It’s unlikely that we’ll see media bosses and MPs going on strike because they can’t afford the cost of living. Yet the spectre of the ‘British public’ is used as a shield by mouthpieces of the wealthy to attack organised labour.[7] 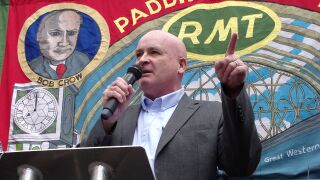 Speaking at the London rail strike rally outside King's Cross Station on 25 June 2022, Mick Lynch managed to stun his audience into silence with what he called a “message to people in our movement, Keir Starmer and others”.

Starmer, said Lynch, is “hesitating… but I want him to be prime minister. That’s what we’ve got. He must win. We’ve got to push him and persuade him to get into a position where he’s in the front rank with you, all of you.”

The shock generated is understandable. Starmer has not hesitated at all; he stands in the front rank of the rail strike’s opponents. This week he took the unprecedented step, one that Tony Blair would have balked at, of forbidding Labour MPs from visiting picket lines. He is now deciding how to punish those very few, some 25, who refused.

Lynch’s decision to back Starmer as all that “we’ve got” and the leader of a future Labour government is aimed at keeping the working class under the thumb of a viciously right-wing party.[8]

This page imported content from Wikipedia on 22 June 2022.
Wikipedia is not affiliated with Wikispooks.   Original page source here
Retrieved from "https://wikispooks.com/w/index.php?title=Mick_Lynch&oldid=248644"
Categories: