Michael "Mike" Thomas Bernard Hoare (a.k.a. 'Mad Mike') is a British Army Soldier and mercenary who was involved in numerous conflicts in Africa and elsewhere, with the the cooperation of the CIA, such as in the "Congolese Affair".

Hoare was born in British India[1] and was educated in England. He joined the London Irish Rifles at the outbreak of the World War II, and served as an officer in India and Burma. He was promoted to the rank of major. After the war, he trained as a chartered accountant, qualifying in 1948.[2]

Hoare subsequently emigrated to Durban, Natal Province in the Union of South Africa, where he later ran safaris and became a soldier-for-hire in various African countries.

Mike Hoare's first mercenary action was in 1961 in Katanga, a province trying to break away from the newly independent Republic of the Congo. His unit was called "4 Commando". During this time he married Phyllis Sims, an airline stewardess.

Numerous "Presidential Daily Briefings" (PDB) contain the exploits of Colonel Mike Hoare and were read solely by the President of the United States at the time (now declassified). This lays claim that there is no doubt the CIA was using Mike and "5 Commando" (Mercenary) to fight the Rebels in the Congo during 1964-1965. Rip Robertson was the CIA man (from the Bay of Pigs) tasked to back up Mike during his exploits to insure Mike was successful which adds even more credence to Mike's CIA loose affiliation[3] [4]. Rip and a band of 17 heavily armed Cuban expatriates[5] supported Mike against the Congolese Rebels during 1964/65. Mike highly praised his CIA (Including Rip Robertson) and CIA backed Cuban fellow fighters[6] on their exploits and fierce fighting ability.

The below presidential daily briefings provide evidence that Hoare was CIA-affiliated.

Hoare organized a group of mercenaries who in 1981 infiltrated the Seychelles disguised as a beer-tasting team, and who attempted a coup d'état.[7] 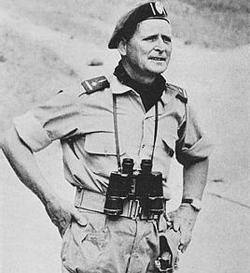