Mustard gas', though technically not a gas and often called sulfur mustard by scholarly sources, is the prototypical substance of the sulfur-based family of cytotoxic and vesicant chemical warfare agents, which can form large blisters on exposed skin and in the lungs.[1]

It has a history of use as a blister-agent in warfare and, along with organoarsenic compounds such as Lewisite, is the most well-studied of such agents. Related chemical compounds with similar chemical structure and similar properties form a class of compounds known collectively as sulfur mustards or mustard agents. Pure sulfur mustards are colorless, viscous liquids at room temperature. When used in impure form, such as warfare agents, they are usually yellow-brown and have an odor resembling mustard plants, garlic, or horseradish, hence the name.

The common name of "mustard gas" is inaccurate because the sulfur mustard is not actually vaporized, but dispersed as a fine mist of liquid droplets. Mustard gas was originally assigned the name LOST, after the scientists Wilhelm Lommel and Wilhelm Steinkopf, who developed a method of large-scale production for the Imperial German Army in 1916.[2]

Mustard agents are regulated under the 1993 Chemical Weapons Convention. Three classes of chemicals are monitored under this Convention, with sulfur and nitrogen mustard grouped in Schedule 1, as substances with no use other than in chemical warfare (though since then, mustard gas has been found to be useful in cancer chemotherapy[3]). Mustard agents could be deployed by means of artillery shells, aerial bombs, rockets, or by spraying from warplanes or other aircraft.

Mustard gas is relatively easy to make, but has been supplanted by new categories of chemical weapons, most notably the far more potent nerve gas agents. Therefore, modern armies progressively reduced or abandoned their mustard gas capabilities, but it remained attainable for less technically advanced countries or recently, groups like ISIS. 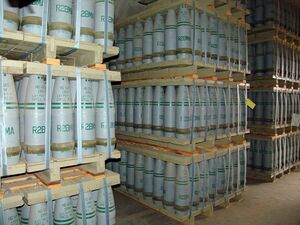 Mustard agent was first used effectively in World War I by the German army against British and Canadian soldiers near Ypres, Belgium, in 1917 and later also against the French Second Army. The name Yperite comes from its usage by the German army near the town of Ypres. The Allies did not use mustard agent until November 1917 at Cambrai, France, after the armies had captured a stockpile of German mustard shells. It took the British more than a year to develop their own mustard agent weapon, with production of the chemicals centred on Avonmouth Docks (the only option available to the British was the Despretz–Niemann–Guthrie process).[4]This was used first in September 1918 during the breaking of the Hindenburg Line.

Mustard agent was dispersed as an aerosol in a mixture with other chemicals, giving it a yellow-brown color and a distinctive odor. Mustard agent has also been dispersed in such munitions as aerial bombs, land mines, mortar rounds, artillery shells, and rockets. Exposure to mustard agent was lethal in about 1% of cases. Its effectiveness was as an incapacitating agent. The early countermeasures against mustard agent were relatively ineffective, since a soldier wearing a gas mask was not protected against absorbing it through his skin and being blistered. The effectiveness of using a urine-soaked mask or facecloth to prevent or reduce injury, a common anecdotal field-expedient remedy attested by soldiers in documentaries e.g. They Shall Not Grow Old in 2018 and others (such as forward aid nurses) interviewed between 1947 and 1981 by the British Broadcasting Corporation for various World War One history programs on being gassed remains unclear.

Mustard agent is a persistent weapon that remains on the ground for weeks, and it continues to cause ill effects. If mustard agent contaminates a soldier's clothing and equipment while cold, then the other soldiers or nurses with whom they share an enclosed space could become poisoned as contaminated items warms up enough to become an airborne toxic agent, and an example of this was depicted in a British and Canadian documentary about life in the trenches particularly once the "sousterrain" (subways and berthing areas underground) were completed in Belgium and France. Towards the end of World War I, mustard agent was used in high concentrations as an area-denial weapon that forced troops to abandon heavily contaminated areas.

After World War I

Since World War I, mustard agent has been used in several wars and other conflicts, usually against people who cannot retaliate in kind:[5]

In 1943, during the Second World War, an American shipment of mustard agent exploded aboard a supply ship that was bombed during an air raid in the harbor of Bari, Italy. Eighty-three of the 628 hospitalized victims who had been exposed to the mustard agent died.[23]

After WWII, stockpiled mustard agent was dumped by the British in the sea near Port Elizabeth, South Africa, resulting in burn cases among trawler crews.[24]

The use of toxic gases or other chemicals, including mustard agent, during warfare is known as chemical warfare, and this kind of warfare was prohibited by the Geneva Protocol of 1925, and also by the later Chemical Weapons Convention of 1993. The latter agreement also prohibits the development, production, stockpiling, and sale of such weapons.