NHS Property Services is a limited company owned by the Department of Health and Social Care in the United Kingdom that took over the ownership of around 3,600 National Health Service (NHS) facilities in April 2013.

All properties that were owned by the SHAs and PCTs and not passed to the CCGs, were transferred to NHS Property Services Ltd, which now manages, maintains and develops the properties on behalf of the DoH.[1]

Former CEO of University College London Hospital NHS Foundation Trust Sir Robert Naylor conducted a review of NHS property and estates and how to make best use of the buildings and land, and published the Naylor Report on 31 March 2017.[2] The report recommended a robust capital investment plan for the NHS by the summer of 2017 and explored three potential sources for an estimated funding gap of £10bn: property disposal; private investment (for primary care); and public funding.[3] 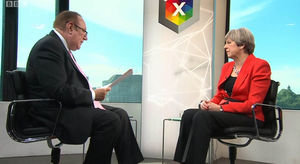 Mrs May: "We support the Naylor Report"

On 24 May 2017, Chris Holden published a video on YouTube entitled "Theresa May fully supports the Naylor Report":[4]

In a BBC TV interview with Andrew Neil on 22 May 2017, Theresa May slipped out a single line about the NHS; she's made the 2017 General Election all about her, strength and stability and Brexit. In half an hour, this was all she had to say about her plans on the NHS: "We support the Naylor Report". It sounded so tediously dull, it couldn't possibly be of any interest.

Holden then described the Naylor Report's proposal that land and facilities owned by NHS Property Services Ltd be sold off quickly and below market value as a £10bn "fire sale".[5]

I'm not sure you're properly interpreting the section you highlight at around 5:09. Section 17 doesn't say they will be spending £10bn to prepare assets to be disposed of. That would be ludicrous even by Tory standards. What it does say is that this £10bn that Theresa May is touting as new money will actually come from asset sales (i.e buildings and land), private capital for primary care (i.e private providers paying for access to NHS services/equipment etc and presumably charging for it) and some money from government.

So only a third of any new money will actually be new public investment. The rest will be asset-stripping and further privatisation. Still a terrible revelation, but not the case you were making. Unless I'm missing something earlier in the report (I'll admit I haven't gone and read the rest yet myself).﻿[6]