Beniamino "Nino" Andreatta was an Italian economist and politician. He was a member of Christian Democrats, and attended the 1978 Bilderberg conference. His early economics career dominated by transatlantic institutions like MIT and SAIS he founded several think tanks close to the Agnelli family. As Minister of Treasury he removed officials who appeared in the list seized from Licio Gelli and imposed the dissolution of the Banco Ambrosiano.

At the Liceo Classico Giovanni Prati di Trento was a school friend of Giorgio Grigolli, later President of the Autonomous Province of Trento.[1]

After graduating in law from University of Padua in 1950, receiving the award for "best graduate of the year", he later completed his studies in economics at the Università Cattolica del Sacro Cuore of Milan, and as a visiting scholar at Cambridge.

In 1961, after his marriage to his wife Giana, he went to India on behalf of MIT, as a consultant to the Planning Commission of the government of Jawaharlal Nehru.

The following year he became a full professor. During his academic career he taught at the Catholic University of Milan as a volunteer assistant, and at the Universities of Urbino, Trento (in 1968, during the student protests) and the Johns Hopkins School of Advanced International Studies (SAIS) and at the Dickinson College for European Studies. In Bologna he founded the Institute of Economics and the Faculty of Political Sciences. Among his students and collaborators many brilliant economists, including Romano Prodi that from 1963 became his assistant.

He had a long association with Bruno Kessler, president of the Province of Trento from 1960 to 1974, on the theme of autonomy.[2]

In 1972 he was among the founders, with Paul Sylos Labini, of the University of Calabria in Rende (province of Cosenza), a campus on the Anglo-Saxon model to stimulate the growth of the South.

In 1974 Andreatta founded in Bologna "Prometeia", an association to analyze the Italian economy, followed in 1976 by Agenzia di Ricerche e Legislazione» di Roma (Arel), with Ferrante Pierantoni, and others, a cross-party group of intellectuals, politicians and entrepreneurs dedicated to the debate on political and economic issues.

Entry into politics and experience 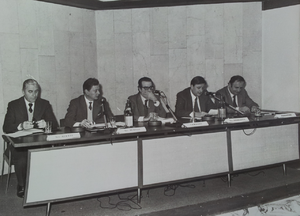 The senators Urbano Aletti, Umberto Agnelli, Beniamino Andreatta and prof. Ferrante Pierantoni at one of the first Arel conferences, 1977

Thanks to the results achieved in the academia, in the 1960s he became economic adviser to Aldo Moro, coming into contact with the group of economists, including Giuliano Amato, Francesco Forte, Siro Lombardini, Giorgio Ruffolo, Franco Momigliano and Alessandro Pizzorno, who then gravitated around the Socialist deputy Antonio Giolitti.

He held several ministerial posts: in 1979 he was Minister of the Budget and Economic Planning in the first government of Francesco Cossiga and without portfolio "special assignment" in the second government led by Cossiga (August 1979 - October 1980).

He was Treasury Secretary from October 1980 to December 1982 in the government of Arnaldo Forlani and the two governments of Giovanni Spadolini. In July 1982 a quarrel with the socialist Minister of Finance Rino Formica brought down the Spadolini government. He did not participate in the following governments of Bettino Craxi and Giulio Andreotti, especially since he was skeptical of the economic policies that these adopted.

His stay at the Treasury coincided with some of the most critical years in the history of contemporary Italy. Andreatta sanctioned the separation of the Bank of Italy by the Italian Ministry of the Treasury, and when in 1981 the P2 the scandal was revealed, he was adamant in removing officials and managers who appeared in the list seized from Licio Gelli. With the onset of the scandal of the IOR of Roberto Calvi and Paul Marcinkus, Andreatta imposed the dissolution of the Banco Ambrosiano, ignoring political and media pressures. Andreatta himself held a historic speech in Parliament publicly reporting responsibilities of the Vatican bank and its leaders. In the eighties, he was also chairman of the Senate Budget Committee.

He was vice president of the European People's Party from 1984 to 1987, and was close to Helmut Kohl and his Christian Democratic Union.

He returned to power in 1992, in the wake of the scandal of Tangentopoli who had alienated many politicians, as Minister of the Budget with the interim of the Cassa per il Mezzogiorno in the first government of Giuliano Amato, He was then foreign minister in the government of Carlo Azeglio Ciampi from April 1993 to March 1994, and in this role he advanced a proposal for reform of the UN.

With the Second Republic Andreatta became leader in the Chamber of Deputies of the People's Party, becoming a leader of the former Christian Democrats siding with the Progressives against the Berlusconi government.

He was one of the main proponents and supporters of the birth of the Olive Tree coalition.

Creating the Ulivo and Minister of Defence

Andreatta was throughout his career a promoter of a mixed economic system and between the pupils of his main school of thought the most important was Romano Prodi, which he sponsored as a guide for the center-left coalition after the fall of the first Berlusconi government in 1995.

Prodi nominated him as defence minister in his first government (May 1996 - October 1998 ), where Andreatta made a number of significant proposals: the reform of the General Staff, the 'abolition of conscription, the reform of the civil service. He launched Operazione Alba (a peacekeeping and humanitarian aid mission to Albania entirely managed by European forces) and proposed ideas to build and organize a European defence forces.

After the fall of the Prodi government in 1998, he founded "Charter 14 June", an association which aimed to broaden the basis of democratic consensus and to reduce the power of parties. During the election campaign for the European elections of 1999, he supported an alliance between the PPI and the Democrats.

On December 15, 1999, during a parliamentary session for the vote of the budget, he had a serious heart attack and ended up in a coma. Andreatta suffered from cerebral hypoxia for twenty minutes, incurring permanent damage.

On 1 January 2000 he was transferred on board a military transport from St. James to St. Orsola-Malpighi Hospital of Bologna.[3]

Andreatta until his death never regained consciousness, dying after more than seven years on 26 March 2007 in the intensive care unit of the Policlinico S. Orsola Bologna.[4][5][6]

Andreatta's son Filippo, professor at the University of Bologna, writes for several Italian newspapers and has been a supporter of the Democratic Party of Italy, an idea also pursued by his father in his last years. His daughter Eleonora, nicknamed Tinny, is a senior executive at Rai and, in 2012, was appointed the director of Rai Fiction.

This page imported content from Wikipedia on 03.03.2022.
Wikipedia is not affiliated with Wikispooks.   Original page source here
Retrieved from "https://wikispooks.com/w/index.php?title=Nino_Andreatta&oldid=241365"
Categories: