The Ohio State University, commonly Ohio State or OSU, is a public land-grant research university in Columbus, Ohio. Founded in 1870 as the state's land-grant university and the ninth university in Ohio with the Morrill Act of 1862,[1] the university was originally known as the Ohio Agricultural and Mechanical College. The college originally focused on various agricultural and mechanical disciplines but it developed into a comprehensive university under the direction of then-Governor (later, U.S. president) Rutherford B. Hayes, and in 1878 the Ohio General Assembly passed a law changing the name to "the Ohio State University".[2] The main campus in Columbus, Ohio, has since grown into the third-largest university campus in the United States.[3] The university also operates regional campuses in Lima, Mansfield, Marion, Newark, and Wooster. 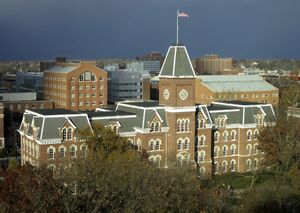 University Hall was the first building on the Ohio State campus. The building was rebuilt in 1976.

The proposal of a manufacturing and agriculture university in central Ohio was initially met in the 1870s with hostility from the state's agricultural interests and competition for resources from Ohio University, which was chartered by the Northwest Ordinance, and Miami University. Championed by the Republican governor Rutherford B. Hayes, the Ohio State University was founded in 1870 as a land-grant university under the Morrill Act of 1862 as the Ohio Agricultural and Mechanical College. The school was originally within a farming community on the northern edge of Columbus. While some interests in the state had hoped the new university would focus on matriculating students of various agricultural and mechanical disciplines, Hayes manipulated both the university's location and its initial board of trustees towards a more comprehensive educational mission. The university opened its doors to 24 students on September 17, 1873. In 1878 the first class of six men graduated. The first woman graduated the following year.[4]

Ohio State began accepting graduate students in the 1880s, and in 1891, the school saw the founding of its law school, Moritz College of Law. It would later acquire colleges of medicine, dentistry, optometry, veterinary medicine, commerce, and journalism in subsequent years. In 1916 Ohio State was elected into membership in the Association of American Universities.

Michael V. Drake, former chancellor of the University of California, Irvine, became the 15th president of the Ohio State University on June 30, 2014. He announced on November 21, 2019 that he would be retiring at the end of the 2019–2020 academic year.[9]

The Ohio State University is among the top 12 U.S. public research universities and 3rd among all universities in industry-sponsored research (National Science Foundation). [11] It is also named as one of the most innovative universities in the nation (U.S. News & World Report) and in the world (Reuters)). In a 2007 report released by the National Science Foundation, Ohio State's research expenditures for 2006 were $652 million, placing it 7th among public universities and 11th overall, also ranking 3rd among all American universities for private industry sponsored research. Research expenditures at Ohio State were $720 million in 2007. In 2006 Ohio State announced it would designate at least $110 million of its research efforts to what it termed "fundamental concerns" such as research towards a cure for cancer, renewable energy sources and sustainable drinking water supplies.[12]

Ohio State has 580,000 living alumni around the world.[13] Ohio State alumni include Nobel Prize recipients, Pulitzer Prize recipients, Olympic Games gold medalists, UFC champions, and Medal of Honor recipients, ambassadors, as well as Fortune 500 CEOs and members of the Forbes 400 list of the world's wealthiest individuals. Numerous graduates have gone on to become U.S. governors, senators and members of Congress. Fredrick Douglas Patterson, the only African American Car Manufacturer and first to join The Ohio State football program. Ohio State alumni have appeared on the cover of Time magazine twelve times, with the artwork of alumnus Roy Lichtenstein featured on an additional two Time covers. George Steinbrenner, former owner of the New York Yankees who won seven World Series with the team, earned his master's degree from Ohio State. Larry Sanger, one of the founders of Wikipedia, and Steve May, chief technology officer at Pixar, both graduated from Ohio State. Roboticist James S. Albus was named a "Hero of US Manufacturing" by Fortune Magazine in 1997.

Ohio State alumni have been inducted into the Baseball Hall of Fame in Cooperstown, New York, the NFL Hall of Fame and the Basketball Hall of Fame. Its athletes have won a combined eighty-three Olympic medals and three times have received the Sullivan Award as the nation's top amateur athlete.

Ohio State's faculty currently includes 21 members of the National Academy of Sciences or National Academy of Engineering, four members of the Institute of Medicine,[14] and 177 elected fellows of the American Association for the Advancement of Science. In 2009, 17 Ohio State faculty were elected as AAAS Fellows. Each year since 2002, Ohio State has either led or been second among all American universities in the number of their faculty elected as fellows to the AAAS.[15][16]

In surveys conducted in 2005 and 2006 by the Collaborative on Academic Careers in Higher Education (COACHE), Ohio State was rated as "exemplary" in four of the seven measured aspects of workplace satisfaction for junior faculty at 31 universities: overall tenure practices, policy effectiveness, compensation, and work-family balance.[17]