Operatiën en Inlichtingen was the Dutch division of Operation Gladio. After later sponsoring by the CIA[1], it apparently became led by the biggest criminal drug kingpins of the Netherlands. Those drug criminals, led by Klaas Bruinsma are linked into a VIPedophile and illegal drug trade network involving some Dutch royals.[2] 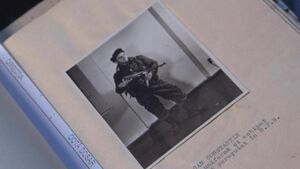 The CIA recruited Dutch agent 'Jan Constantin' and 4 others, trained them in Amsterdam and dropped them as what seems mercenaries in countries like Romania, according to Nieuwsuur [3]

After World War 2 the CIA employed a few Dutch secret service agents that actively started opposition groups alongside their own agents in Romania and Bulgaria from the 1950s, Nieuwsuur revealed in 2016. According to the segment they "actively employed partisans to stimulate anti-communist actions after a conference in Washington in 1951". The CIA and AIVD (at that point known as BVD) both didn't had any collection upon request in their databases. What they did there is not recollected, at least according to the official narrative.[4]

Around 1952 framework was finalized and two groups of 21 secret service agents along with the newly formed BVD, started actively recruiting - right-wing - civilians in useful positions that did not have a leading position in their workplace or any communist ideas, such as teachers, salesman, welders, drivers, physicians and sailors. This became later known as Operation Gladio. These two groups were called Operations and Intelligence. This group directly reported to the Dutch Minister of War and former officer, Kees Staf from 1952 and the PM Willem Drees from 1956.

According to the Dutch investigative program Brandpunt the agents all were personally recruited by one member who became their handlers. They all recalled the "strange exceptional professionalism" of the operation; need to know basis, training in plausible deniability, required to be armed 24/7, they never met another agent and were also trained in the US and the UK (which would also be their back-up basis of operations in case of a Russian attack), trained up to 400 hours. In the 50s, 24 divisions were established: Operations had 7, Intelligence had 17. At the end of the 50s all these agents had their own secret intelligence-station in their house and a container with weapons, money and equipment which was to be held secret for their families. If someone "for any reason whatsoever" disappeared, they'd "vanish in the mist and never be found".

Operations - located at first in Utrecht, later in Amsterdam in the HQ of the Dutch Marines - fell directly under PM Willem Drees and had these 7 divisions; Psyops, Sabotage, Connections, Falsification, Operational Finance, Security and Codes. Operations was noted as the "Extreme Measures-unit". Their task was to "commit acts of sabotage", "acts of violence against persons - politicians, activists and journalists included - that supported the enemy", "commit robberies" and "make propaganda that would hurt the enemy". Gladio was already infiltrated in Dutch media as head of Dutch public broadcaster NCRV and head of the chairman of the Dutch Council of Journalism Tom Herstel was an instructor for the psyop-division. Interesting note; HQ Villa Maarheeze, Clingendael Institute, and one of three royal palaces of Bernhard and Juliana Wilhelmina are located in the same small town of Wassenaar within... 6 miles of each other.

In the 1950s and 1960s, US Deep state had vastly more money than the BVD, and used it to exert influence into the Netherlands. By 1958, for example, the CIA paid the salaries of approximately 51 of the 691 employees of the Dutch service.[5]

“A year earlier, Dutch crime bosses, Klepper and Mieremet were arrested by police. In their car machine guns and hand-grenades were found. When the EOD discovered that none of the grenades had serial- or production numbers, the MiVD was alerted. The MiVD suspected that the grenades were from a depot that was hidden in the forest of Scheveningen near The Hague, containing 40 metal boxes with pistols, machine guns, revolvers, hand-grenades and explosives. It was raided in the 1980s by thiefs. They replaced the boxes with fridges, causing the theft to be only noticed years later as metal detectors found nothing during the inspection. (...) Klepper and Mieremet were sentenced to 16 months in jail. Both were assassinated years later.”
Menno van Dongen (September 2007)  [6]

The alleged dozens of members appear to be connected to Dutch hashish kingpin of the 70s and 1980s Klaas Bruinsma. The police investigation never could pin point how Bruinsma's clan located the hidden weapon depots through dozens of Dutch forests and were able to place other objects in them to replace the technique of the Gladio agents scanning their owns depots with metal detectors to check if their weapons were stolen.

Up until this point in the 1990s the Dutch never admitted Gladio to be existent. Several weapon stashes were found and reported by corporate media, but mayors, prosecutors, and other high-ranking officials all denied knowing the origins. Even when newspaper Elsevier released an article naming several Dutch spooks and "at least two MPs as KGB-agents by our source, a spook himself.[7], later revealed to be CIA-agent Carl Armfelt." Ruud Lubbers admitted[8] the existence in 1990 of a Dutch division of the Operation Gladio-network. Lubbers denied the division to have bombed anything, and downplayed the activities massively. A Belgian agent revealed to Amsterdam main newspaper Het Parool that the Belgian and Dutch Gladio-networks were in fact actively working together, meeting regularly. With the Belgian investigation already connecting O&I to the Brabant Massacres, a citizen forum was set up collecting all newspaper evidence to solve not only the work of groups like RaRa, but also the Olaf Palme murder as well.[9]

A company listed Quia Oportet is secretly listed elongation of the Dutch Gladio divisions with a founding date of 1992... with an alleged end date just months after 9-11.

Their activities show a lot of infighting, although a suspected link to the Brabant massacres is suspected even up to Marc Dutroux[10] if not through Gladio[11], then through Bruinsma[12][13][14].

Former shadow cabinet member Ed van Thijn - also implicated in a child sex ring[15] - was suspected of covering-up and protecting several commanders of a regional police-unit that several members of Klaas Bruinsma's crime syndicate had infiltrated or simply out-conned. Bruinsma's gang was noted be responsible for the biggest thefts of Gladio-weapons on Dutch soil. Prosecutor and Minister of Justice Fred Teeven made a secret deal with associate of Bruinsma Mink Kok around the 2000s in Amsterdam for the theft of the Gladio weapons.[16]

In 1994, two former agents - including a major - were arrested and jailed for half a year for poisoning food company Nutricia.[17] Following concerns the other agents would go rogue and commit attacks like the Westland New Post, the Dutch government officially denied the division to still exist, but reserved $350.000 to pay the 40 former agents until death, and secretly re-contracted them.[18]

11 March 2021 Jun  The Dutch Operation Gladio group.
This group, with drug kingpins linked to royals having criminal knowledge of certain crimes has escaped punishment. Child sex networks, cocaine worldwide networks, CIA financing, it's all here, but the media never mentions the dozens of newspapers all giving just one part of the story as if this is not a cooperating network. This page is the best page on the net linking all individuals, instead of the limited hangout the Wikipedia page provides.