Operation Tannenberg (Unternehmen Tannenberg) was a codename for one of the anti-Polish extermination actions by Nazi Germany that was directed at the Poles during the opening stages of World War II in Europe, as part of the Generalplan Ost for the German colonization of the East. The shootings were conducted with the use of a proscription list (Sonderfahndungsbuch Polen), compiled by the Gestapo in the span of two years before the 1939 invasion.[1]

The top secret lists identified more than 61,000 members of the Polish elite: activists, intelligentsia, scholars, clergy, actors, former officers and others, who were to be interned or shot. Members of the German minority living in Poland assisted in preparing the lists.[2] is estimated that up to 20,000 Germans living in Poland belonged to organizations involved in various forms of subversion.[3]

Operation Tannenberg was followed by the Intelligenzaktion, a second phase of the Unternehmen Tannenberg directed by Heydrich's Sonderreferat from Berlin, which lasted until January 1940. In Pomerania alone, 36,000–42,000 Poles, including children, were killed before the end of 1939.[4]

The plan was finalized in May 1939 by the Central Office II P (Poland). Following the orders of Adolf Hitler, a special unit dubbed Tannenberg was created within the Reich Main Security Office (Reichssicherheitshauptamt). It commanded a number of Einsatzgruppen units formed with Gestapo, Kripo and Sicherheitsdienst (SD) officers and men who were theoretically to follow the Wehrmacht (armed forces) into occupied territories. Their task was to track down and arrest all the people listed on the proscription lists exactly as it had been compiled before the outbreak of war.[5]

The first phase of the action occurred in August 1939 when about 2,000 activists of Polish minority organisations in Germany were arrested and murdered. The second phase of the action began on September 1, 1939, and ended in October, resulting in at least 20,000 deaths in 760 mass executions by Einsatzgruppen special task units with help from regular Wehrmacht units. A special formation was created from the German minority living in Poland called Selbstschutz, whose members had trained in Germany before the war in diversion and guerilla fighting. The formation was responsible for many massacres and due to its bad reputation was dissolved by Nazi authorities after the September Campaign with transfer to regular formations.[6] 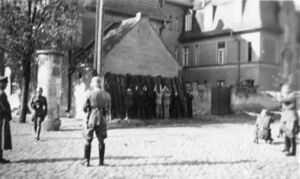 During Operation Tannenberg patients from Polish hospitals were murdered in Wartheland (Wielkopolska) by Einsatzgruppe VI under Herbert Lange.[7] By mid-1940, Lange and his men were responsible for the murder of about 1,100 patients in Owińska, 2,750 patients at Kościan, 1,558 patients and 300 Poles at Działdowo who were shot in the back of the neck; and hundreds of Poles at Fort VII.[8]