Orly Weinerman is an Israeli model and actress who was romantically linked to Saif al-Islam Gaddafi from 2005 until the NATO bombing of Libya in 2011, which resulted in the overthrow and murder of Saif's father Muammar Gaddafi. Following Saif Gaddafi's arrest on 19 November 2011 and detention in the Libyan town of Zintan, Orly Weinerman has campaigned to have him brought to trial at The Hague's International Criminal Court (ICC).

On 3 September 2013, in a Facebook message to Patrick Haseldine, Orly Weinerman said:

"Hi Patrick, what many people told me is that actually the Zintan people are looking after him... and not to trust the ICC people so after I wanted him to get to a safe place, I got convinced that there he is safer than in the hands of the ICC."

"Libya's public prosecutor, Abdel-Qader Radwan, has said the case against Saif Gaddafi will be presented to a court in Tripoli on 19 September 2013. If the Zintan people do hand him over for trial in Tripoli, that will be his death sentence. Like Saif al-Islam's British lawyer, John Jones QC, I think the British Government must do all it can to prevent him facing a 'show trial' and execution in Libya, and instead deliver him to the ICC at The Hague. I fear however that Prime Minister David Cameron wants to have him killed without any sort of trial at all (as per Cameron's Lockerbie secret)."

An Israeli model and actress has admitted to a six-year romantic relationship with Colonel Muammar Gaddafi’s son Saif and appealed to former British prime minister Tony Blair to intervene to save his life. The son of the late Libyan dictator currently faces the death penalty in his native Libya, where he is about to go on trial for his alleged part in the killing of protesters during last year’s civil war.

Orly Weinerman, 41 — who played a dumb blonde in the 1990s hit Israeli TV show "Shemesh", and was a Hebrew gossip column regular — had previously denied her romance with Saif Gaddafi. But in September 2012 she acknowledged that they were in a "discreet" relationship that began in London in 2005, when they were introduced by mutual friends, and that ended only when the civil war broke out in 2011.

According to a Daily Mail report, she said that although there was tension in the relationship because of their conflicting backgrounds, there was even talk of marriage before the end. Weinerman said Saif was a civilised, serious and honourable man who was now being unjustly treated. The ICC prosecutor had asked judges to issue arrest warrants for Libyan leader Muammar Gaddafi and son Saif, for crimes against humanity, accusing them of deliberately targeting civilians in their crackdown against rebels.

Orly Weinerman said her status as a Jew complicated matters for Saif Gaddafi, 40, who apparently feared the consequences of their relationship becoming public in Libya. She implied that she considered converting to Islam, noting that her parents were against such a move. When Der Spiegel reported in 2006 that they were dating, the relationship prompted criticism of her in the Israeli media, even though she denied the story.

Weinerman told the Daily Mail that "the fact that Saif was prepared to involve himself in a loving relationship with a Jew is a measure of how open and civilised he is. He judged people for what they are — not what people perceive them to be. Saif never made an issue of my religion, or the country I came from."

She indicated that theirs was an intermittent but serious connection, maintained while he studied for a PhD at the London School of Economics and she pursued her acting and modelling career in Israel. 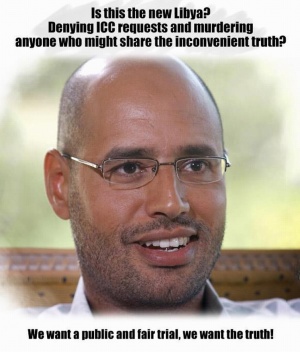 Orly Weinerman said she did not meet any of Saif’s high-level contacts, who she said included Tony Blair. Weinerman urged Blair to use his influence on Saif Gaddafi’s behalf. Saif’s contacts with Blair were confirmed when a letter the former prime minister had written to him in 2007, advising him on his PhD, was found during the Libyan uprising.

The International Criminal Court sought but failed to extract Saif Gaddafi to stand trial in The Hague for crimes against humanity, because human rights groups feared he would not receive a fair trial in his home country, the Daily Mail reported.

"The ICC has let him down and so has the international community," Weinerman said, urging Blair to compel Saif Gaddafi’s accusers to 'see reason'. "Saif worked closely with Mr Blair before he was captured. The two are old friends — it is time that Mr Blair returned some loyalty," Weinerman said. "Mr Blair is a man of God — as a Christian he has a moral duty to help a friend in need."

"You should just ask Mr Blair what a serious, honourable person Saif is," she continued. "Killing him will achieve absolutely nothing, beyond punishing him for who his father was. Absolutely everything must be done to save him."

Saif Gaddafi is reported to be held by the Libyan rebel forces who captured him in November 2011 in a mountain town named Zintan, where he is detained awaiting trial.

After her revelation had been reported in the Hebrew press, Weinerman posted a link to the Daily Mail story on her Facebook account and wrote that "for a long time I have had trouble falling asleep at night, revealing my anxiety among good friends and between the living room walls. But now, with injustice displayed proudly on the world stage, I challenge you to lend me a hand and save another victim from hatred, prejudice and moral corruption."[1]

In June 2016, Orly Weinerman reposted on Facebook[2] Cynthia McKinney's post[3] reporting that Jordana Cutler, Benjamin Netanyahu's former advisor and chief of staff at the Israeli embassy in Washington, had joined Facebook’s Israel office to oversee the planning and execution of measures taken to combat Boycott, Divestment and Sanctions (BDS) campaigns.[4]