Oil reserves in Venezuela are the largest in the world, and the state-owned PDVSA provides the government of Venezuela with substantial funding resources. The government of Venezuela treats PDVSA as a cash-cow,[2] and the company only hires political supporters of the president.[3] Between 2004 and 2010 PDVSA contributed $61.4 billion to the government's social development projects. Around half of this went directly to various Bolivarian Missions, with the remainder distributed via the National Development Fund.[4][5] 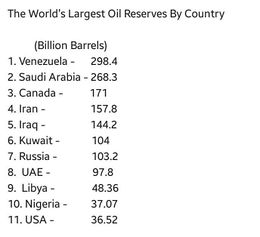 Venezuela has 77.5 billion barrels (1.232×1010 m3) of conventional oil reserves according to PDVSA figures, the largest in the Western Hemisphere and making up approximately half the total. This puts Venezuela as fifth in the world in proven reserves of conventional oil. By also including an estimated 235 billion barrels (3.74×1010 m3) of tar-like extra heavy crude oil in the Orinoco Belt region, Venezuela claims to hold the largest hydrocarbon reserves in the world. Venezuela also has 150 trillion cubic feet (4.2×1012 m3) of natural gas reserves.

PDVSA has a production capacity, including the strategic associations and operating agreements, of 4 million barrels (640,000 m3) per day (600,000 m³). Officials say production is around 3.3 million barrels per day (520,000 m3/d) although most secondary sources such as OPEC and the Energy Information Administration (EIA) put Venezuela's output at least 500,000 barrels per day (79,000 m3/d) lower.

Venezuela officially nationalised its oil industry on 1 January 1976, and along with it came the birth of PDVSA. Assets of ExxonMobil and ConocoPhillips were expropriated in 2007 after they refused to restructure their holdings in Venezuela to give PDVSA majority control. Total, Chevron, Statoil and BP agreed and retain minority interests in their Venezuelan projects.[6] Arriving at a settlement with ExxonMobil has proven difficult with Venezuela offering book value for ExxonMobil's assets and ExxonMobil asking for as much as $12 billion. This and a number of other matters including the claims of ConocoPhillips remain before the World Bank’s International Centre for Settlement of Investment Disputes.[7]

Much of Venezuela's income is thanks to PDVSA oil revenue, the United Socialist Party of Venezuela (PSUV)'s ATM machine. The country's credit rating is CCC, meaning it is one step above default. PDVSA is the country's most important entity and is watched closely by Wall Street.

On 17 July 2017, President Trump said that if President Maduro follows through on his pledge to rewrite the country's constitution on the July 30 elections, the US "will take strong and swift economic actions." All options are reportedly on the table. Analysts expect that the Trump administration will likely focus on sanctions targeting individuals, at least initially, but said the most effective sanctions would likely target petroleum exports considering that energy accounts for roughly 95% of Venezuela's export economy.

Assuming the worst, if US refiners were banned from importing Venezuelan crude, they would need to find new sources. It won't come from the United States. We don't have enough of it:

"We're out of balance right now and (sanctions) would make us more out of balance," says Rick Joswick, managing director for oil with the PIRA Energy Group, a unit of S&P Global Platts.

The Gulf of Mexico region refineries import about half the amount of Venezuelan crude than it did 20 years ago, but Venezuela is still an important enough source of black gold. At 795,000 barrels per day, Venezuela was the single largest supplier of imported crude into the Gulf in April, according to the US Energy Information Administration (EIA), followed by Saudi Arabia at 714,000 barrels.

The Phillips 66 Sweeny Refinery in Old Ocean, TX, imported nearly 46.2 million barrels of Venezuelan crude last year, the most of any US refinery, according to the EIA. Citgo's Lake Charles, La., refinery took in the second-most with nearly 44.7 million barrels in 2016, again according to the EIA. Citgo is owned by PDVSA, with Russian money in the middle of it all. This potentially makes a Citgo sanction of interest. If anti-Russia, anti-PSUV senators like Mark Rubio opt to punish Venezuela by just going after Citgo, they'd be going after Russian oil firm Rosneft as well — striking two birds with one stone.

Any sanctions hurting Venezuela's oil revenue stream could lead to a default — bad for PDVSA, bad for Maduro, terrible for Venezuela. The government would be hard pressed to convince anyone other than salivating distressed asset investors to fund the government.

The US threat of deeper sanctions has now lit the fuse. For the Street, the question is how the opposition would treat bondholders if they ever came to power? Meanwhile, a hard default threat is plausible under the Maduro administration if pressed on sanctions. That means higher uncertainty and risk to PDVSA and to the Venezuelan economy, exploding and imploding here, there and everywhere on a weekly basis:

"Our view on Venezuela and PDVSA assumes regime change prior to default," says Siobhan Morden, a managing director for Nomura Securities in New York. "It’s logical for (Washington) to fully implement the current strategy of individual sanctions before risking the economic and political costs of a sector based strategy," says Morden. She thinks sectoral sanctions will likely occur at a later stage of the political crisis, should the status quo remain in Caracas.[9]

Opposed by China and Russia

The latest US sanctions on Venezuela will not give the White House what it wants, according to Chinese Foreign Ministry spokeswoman Hua Chunying:

“The present problem in Venezuela should be resolved by the Venezuelan government and people themselves. The experience of history shows that outside interference or unilateral sanctions will make the situation even more complicated and will not help resolve the actual problem.”

China and Venezuela have extensive business links; oil being the largest, where the countries have a loan-for-oil deal. Venezuela owes China more than $62 billion and is behind in the oil shipments.

Many analysts have said the loans from China and Russia have prevented Venezuela from default. In August 2017, Russian oil major Rosneft announced that it paid $6 billion to Venezuela’s PDVSA as an up-front payment for oil from the country. In November 2016, Rosneft received a 49.9 percent stake in a Venezuelan-owned American refiner, transporter and marketer of transportation fuels Citgo as collateral. American lawmakers have called it a big problem for US national security and sent a warning letter to President Donald Trump, who exempted Citgo from the recent round of sanctions. The White House has explained it as an attempt “to mitigate harm to the American and Venezuelan people.” In April, media reported that Citgo gave $500,000 to President Trump's inauguration committee through a subsidiary.[10]

"We will carefully analyse the implications of the sanctions imposed by the United States, and their possible effect on the interests of Russia and Russian businesses. We can already say that they will not affect our willingness to expand and strengthen cooperation with the friendly nation of Venezuela and its people.”[11]