From Wikispooks
< Patrick Haseldine
Jump to navigation Jump to search

In defence of dad 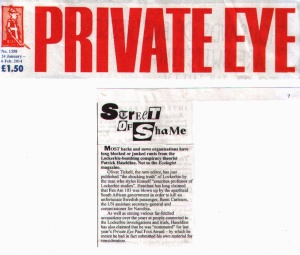 On 4 February 2014, Caroline Feraday and her husband Mark Lewis launched an unprovoked attack on former diplomat Patrick Haseldine and the editor of The Ecologist Oliver Tickell on Twitter by referring to an article published in the then current issue of Private Eye magazine:

Have you nominated yourself for Twat of the Year (TOTY) too? @BerntCarlsson[1]

Lockerbie: Private Eye rumbles "Haselnut" and The Ecologist:
Why tweet as @BerntCarlsson when #Haselnut would be apt?[2]

In response to Mr and Mrs Lewis, Patrick Haseldine tweeted:

The Twitter exchange that began on 4 February 2014 quickly developed into a discussion of whether in 1993 Lord Chief Justice Taylor had actually banned Alan Feraday from appearing as an expert witness in future trials such as the Lockerbie bombing trial (as the BBC had reported in 1995).[5]

Caroline refused to elaborate further but the fact is that the BBC report still maintains LCJ Taylor banned Alan Feraday in 1993, as does The Guardian[6] and lawyer Gareth Peirce.[7]

I have explained this repeatedly and without any confusion.
For these purposes I will explain it one final time.
I am being harassed by Patrick Haseldine.
I have blocked him on Twitter and on my email account. He continues to find ways to harass both me, my professional and social contacts and my family.
Aside from the obvious insanity of his claims, which have no basis in fact outside of his own mentally ill mind, and which I have no intention of being drawn into debating nor would it be proper or reasonable for me to do so...the frequency of his emails and the increasing instability of his sanity are cause for much distress and concern.
On occasion I have been contacted by various weirdos and consider it the downside of a peculiar yet rewarding job. If that's all this was I would brush it aside.
However, this high level of intimidation of me, my contacts, and my family is without reproach and must stop immediately.
I have been incredibly clear. Do not email me. Do not contact me. You have no right to, and your behaviour is unacceptable.
I will add into my police complaint of harassment anyone else who is encouraging this insane bully.
I imagine you'll be as livid as I am that he is sharing your email addresses and email contents openly with strangers, which is a breach of your own rights.
Stop this immediately, it makes you look crazy. Probably because you are, but that's not my problem.
Any reply to this will constitute further harassment and be forwarded directly to the Police automatically without being read.
Caroline Feraday