Patrick Mercer (born 26 June 1956) is a conservative politician who has worked for the military and the BBC. He was Shadow Minister for Homeland Security between 2003 and 2007 during which time he was quoted widely on security and "terrorism" issues. He has also worked as a consultant for the private security firm Blue Hackle [1] which is principally involved in Iraqi corporate protection.

Mercer went to Private School in Chester. He joined Sandhurst in 1975, suggesting that he spent a year there in-between school and university, after which he attended Exeter College (Oxford). He received an MA in modern history in 1980. Mercer then joined the British Army. In 1986 he was part of a military training team in Uganda and in 1988 he attended the Army Staff College in Camberley, where he was later an instructor between 1994-95.[2] He also taught at the Army’s University at Cranfield. During the 1990s Mercer completed nine tours in Northern Ireland and commanded a battalion in Bosnia, Canada and Tidworth.[3] He left the Army and became the Defence Reporter for BBC Radio 4’s Today Programme. He reported from a number of trouble spots, notably Kosovo. Upon being selected as the Tory’s candidate in Newark, he left the Today Programme and became a freelance journalist writing for the Daily Telegraph. He was also part of the King’s College London Team that had been sent to design defence policy for East Timor.[4] In June 2003, Mercer was appointed to a newly created front bench position – Shadow Minister for Homeland Security - a position he held until March 2007 when he was demoted by David Cameron after saying that during his Army career he had seen “a lot of ethnic minority soldiers who were idle and useless, but who used racism as cover for their misdemeanours.”[5] He is now a member of the Home Affairs Select Committee.[6]

In 2004 Saladin Security paid for Patrick Mercer the Conservative MP for Newark and Retford to visit Afghanistan. The entry in Mercer's register of interests reads as follows: 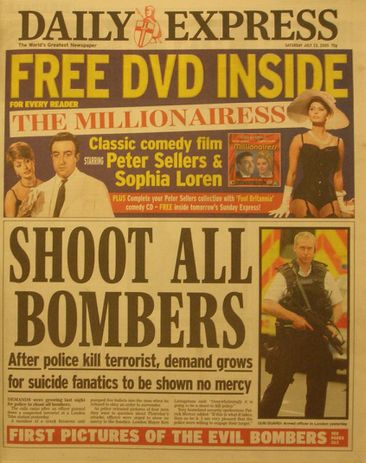 The cover of UK's Daily Express from 23 July, 2005 quoted Patrick Mercer as saying after the killing of Jean Charles de Menezes, that "If this is what it takes then so be it. I am very pleased that the police were willing to engage their target."