Paul Kagame is a Rwandan politician and former military leader. He is the sixth and current President of Rwanda, having taken office in 2000. Kagame previously commanded the Rwandan Patriotic Front (RPF), a Uganda-based rebel force which invaded Rwanda in 1990 and was one of the parties of the conflict during the Rwandan Civil War and the armed force which ended the Rwandan Genocide. He was considered Rwanda's de facto leader when he served as Vice President and Minister of Defence under President Pasteur Bizimungu from 1994 to 2000.

Paul Kagame was born to a Tutsi family in southern Rwanda. When he was two years old, the Rwandan Revolution ended centuries of Tutsi political dominance; his family fled to Uganda, where he spent the rest of his childhood.

In the 1980s, Kagame fought in Yoweri Museveni's rebel army, becoming a senior Ugandan army officer after Museveni's military victories carried him to the Ugandan presidency.

Paul Kagame joined the RPF, taking control of the group when previous leader Fred Rwigyema died on the second day of the 1990 invasion. By 1993, the RPF controlled significant territory in Rwanda and a ceasefire was negotiated.

The assassination of Rwandan President Juvénal Habyarimana in April 1994 set off the genocide, in which Hutu extremists killed an estimated 500,000 to 800,000 Tutsi and moderate Hutu. Kagame resumed the civil war, and ended the genocide with a military victory.

In 2021 Justin Bahunga described Rwanda as a "one-man show of Paul Kagame."[2]

In April 2022, British Home Secretary Priti Patel concluded an agreement with President Kagame whereby asylum seekers in the UK would be exported to Rwanda.[3] 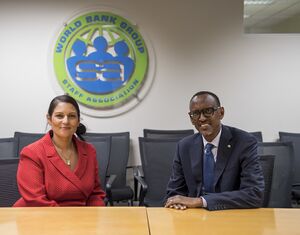 The UK will send asylum seekers who attempt to cross the English Channel to Rwanda for processing, after sealing a £120 million deal with the Rwandan government.

British Home Secretary Priti Patel will sign the agreement this afternoon during a visit to Rwanda’s capital, Kigali, following nine months of negotiations and several failed attempts to reach similar deals with other countries and offshore territories.

Asylum seekers judged by the Home Office to likely be economic migrants would be flown to the Commonwealth country and held in a facility until their application is processed, while the rest of the asylum seekers would stay in stricter, Greek-style centres in Britain until the Home Office makes a decision on their applications. The first of such centres is expected to open in Linton-on-Ouse, North Yorkshire.

Prime Minister Boris Johnson announced the deal in a speech Thursday in Kent, in which he argued Britain “cannot sustain a parallel immigration system” along with its post-Brexit points-based system because it creates unsustainable pressure for the UK taxpayer and is unfair to those applying to settle in Britain through “safe and legal routes.”

“From today, our new migration and economic partnership will mean that anyone arriving in the UK illegally as well as those who have arrived illegally since 1 January 2022 may now be relocated to Rwanda,” he said.

“This innovative approach, driven by our shared humanitarian impulse and made possible by Brexit freedoms, will provide safe and legal routes for asylum while disrupting the business model of the gangs because it means economic migrants taking advantage of the asylum system will not stay in the UK.”[4]