Pedro Sánchez is a Spanish economist and politician serving as Prime Minister of Spain since 2 June 2018.[1][2] He is also Secretary-General of the Spanish Socialist Workers' Party (PSOE), holding office for the second time after winning a leadership election in June 2017.

He served as town councillor in the City Council of Madrid from 2004 to 2009. In 2009, he was first elected Deputy in the Congress of Deputies. In 2014, he became Secretary-General of the PSOE, and he was the party's candidate for prime minister in the 2015 and 2016 Spanish general elections. During his first term as Secretary-General, he was opposed to the re-election of Rajoy as Prime Minister. Rajoy needed the abstention of the PSOE in the Congress of Deputies in order to secure a parliamentary majority. Tensions grew within the party that allowed Rajoy to form a government; due to its opposition by Sánchez, he stepped down as Secretary-General on 1 October 2016. He simultaneously resigned as Deputy, and a caretaker committee took over the PSOE leadership. He would eventually win the party primaries, defeating Susana Díaz and Patxi López, and was reinstated Secretary-General in June 2017. Under his tenure, the party backed the Government of Spain in its handling of the Catalan independence referendum and the subsequent constitutional crisis.

On 31 May 2018 the PSOE filed a vote of no confidence in the government of Mariano Rajoy, which passed with the support of the PSOE, Unidos Podemos, and Basque, Valencian and Catalan regionalist and nationalist parties. On 1 June 2018, a Royal Decree named Pedro Sánchez Prime Minister of Spain and he was officially sworn into the office before King Felipe VI the day after.

Pressure from the Integrity Initiative

In June 2018, Pedro Sánchez announced plans to appoint Pedro Baños as Director of the Spanish Department of Homeland Security‎. However, when the Spanish cluster of the Integrity Initiative learned of this, perceiving Baños as a "pro-Kremlin voice" they began an intensive lobby against his appointment. After 6 days Pedro Sánchez instead appointed Miguel Ángel Ballesteros. 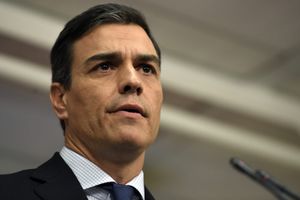 +
Has image2
File:Pedro_Sanchez.jpg +
Has noRatings
0 +
Has objectClass
Person +
Has objectClass2
Person +
Has posting
Prime Minister of Spain +
Has revisionSize
3,476 +
Has revisionUser
Robin +
Has wikipediaPage
https://en.wikipedia.org/wiki/Pedro Sánchez (politician) +
Has wikipediaPage2
https://en.wikipedia.org/wiki/Pedro_S%C3%A1nchez_(politician) +
Is not stub
true +
Source credit
Wikipedia +
Has subobject"Has subobject" is a predefined property representing a container construct and is provided by Semantic MediaWiki.
Pedro Sánchez +