Pentti Väänänen is a former Secretary-General of the Socialist International (1983-1989) and was a key player behind the scenes in international politics during the height of the Cold War.[1]

In the East-West conflict the SI first clearly took the side of NATO and the West. When Willy Brandt, the leader of the German Social Democrats, was elected President of the SI in 1976, and Bernt Carlsson became Secretary-General, the SI began taking an active role in promoting "detente" and dialogue between the parties in different international conflicts, such as the East-West divide and the nuclear arms race issue. It also concerned such regional conflicts as the Middle East, Central America and Southern Africa. Väänänen continued this work when he took over from Carlsson in 1983.

The Rose and the Fist 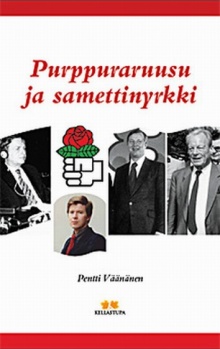 "The Rose and the Fist"

Having worked closely with world leaders as a trusted adviser and intermediary, Pentti Väänänen wrote a book that has been published in his native Finnish language "Purppuraruusu ja samettinyrkki".

Drawing on official reports and his own records, Väänänen's book gives a fascinating insight into the politics of the time and what really went on in the circles of power. This book gives previously unpublished information about top-level discussions with US Presidents in the White House and Soviet Secretaries General in the Kremlin on questions of the arms race and disarmament.

In the Middle East the book tells about efforts to promote Israel's contacts with the Palestinians and also with the Soviet Union. In Central America the SI worked to promote peace and to help Nicaragua integrate into the international community under its new Sandinista Government. In Southern Africa the SI organised meetings between European political leaders, the South African and Namibian liberation organisations and other African states.[2]

On 13 August 2012, Pentti Väänänen reported on his Facebook page:

"The English language translation of 'Purppuraruusu ja samettinyrkki' is complete. Now it's time for editing, but with any luck, it will be ready by the end of the year."[3]

The English version of the book entitled "The Rose and the Fist" is now available for purchase here. 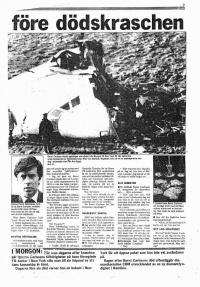 At about 5.30pm on 21 December 1988 the telephone rings in the home of Pentti Väänänen, then Secretary-General of the Socialist International, and an old friend of Bernt Carlsson:

"It was Bernt calling from the airport just before he boarded Pan Am 103," Väänänen says. "We exchanged Christmas greetings and talked a little about the Namibia agreement."

Bengtsson: Did he tell you who he had seen in London?

Bengtsson: How would you describe his frame of mind?

"If you want me to tell you in just a few words, he sounded nervous," Väänänen replied.

Picture captions:
(Picture left-hand side): His friend, Pentti Väänänen, thought that Bernt Carlsson seemed nervous before his trip to New York, despite approaching the climax of his life.
(Right-hand picture): Bernt Carlsson had a secret meeting in London with the world's largest producer of diamonds, De Beers. It would seem that he was coerced into it.

Even the Finnish people themselves could not have expected that the Iraq War would have more rapid and serious domestic political consequences in their own homeland than in Britain or the United States. Yet their new prime minister, Anneli Jäätteenmäki, was forced to resign on 18 June 2003 only two months after taking office following the electoral success of her Centre Party.

The bare details of the drama are simple. During the electoral campaign, Jäätteenmäki chose to take advantage of widespread anti-war sentiment in Finland and attacked the then prime minister, Paavo Lipponen, for supporting the US-led war.

It appeared that Jäätteenmäki had at her disposal a secret report of confidential discussions between Lipponen and American president, George W Bush. In public, she denied ever having seen or obtained such a document. However, a leak was so obvious that the police began to investigate – leaking secret government documents is a crime – and Jäätteenmäki, who in the meantime had become the new prime minister, was questioned as a witness.

At this point she chose to tell the truth, and said that she in fact had received the secret document. She then implicated a senior civil servant, number two in the presidential administration, as her source. The poor man was sacked immediately by the president of the republic herself, Tarja Halonen.

Anneli Jäätteenmäki was caught out for engaging in dirty tricks – the most severe of which was lying during the election campaign. This destroyed confidence in her among the public and her coalition partners, and finally also within her own party.

There is nothing wrong or unusual in keeping the leader of the opposition informed of major issues of foreign policy. If Jäätteenmäki had chosen to ask her questions in a proper manner, she probably would have received the answers. But she preferred to rely on a criminal leak, and to use the information in a manner that was perceived as unfair and probably also inaccurate, and then to lie about it. She had to go.

The saga will continue. A new prime minister, Matti Vanhanen, is in place. The civil servant who leaked extracts of a classified document will be prosecuted. He claims that Jäätteenmäki actually asked for the document. If that is the case, Jäätteenmäki may be prosecuted for incitement. And even if it turns out not to be the case, as she claims, she will appear in court as a witness.

An example to the world?

The moral of the story is that in Finland a political leader must take the responsibility for his or her words – even those uttered during a passionate electoral campaign. If you lie, you walk.

Can one draw parallels between the Finnish case and those of the UK and the US? Of course, they are not identical. Finland – unlike the US, UK, France or Germany – did not play a major role in the Iraq crisis. The crisis in the country has combined aspects of a domestic political soap opera with a serious criminal investigation.

However, some parallels may indeed exist. Political leaders of any size – whether Jäätteenmäki, George W Bush, or Tony Blair - should be held responsible for the words they speak in public; that is a test of democracy. As a Finn, I am pleased that my country passed the test. As for Britain and the United States, we must await results – not simply of the investigations into the political rhetoric employed by their leaders before the recent war, but of the actions that follow.[4]