Peter Goldsmith, a.k.a. Lord Goldsmith was Attorney General for England and Wales when Tony Blair dispatched UK troops to support the 2003 Invasion Of Iraq. He wrote a report stating that the would would likely be ruled illegal in the UN due to lack of support, but Blair ignored him. After a "secret and personal" letter from Blair, the SFO ceased investigation of the Al-Yamamah arms deal.

In 2015, the Daily Mail published story entitled "Burn it, destroy it: Pressure builds on Blair over Chilcot report as it's revealed ministers were told to destroy key evidence on eve of conflict which showed Iraq War was ILLEGAL". This stated that as UK Attorney General, 10 days before the 2003 US-led invasion of Iraq, Goldsmith gave Tony Blair a report which stated that it was likely to be challenged under international law since it did not have UN backing. Ministers and all officials who had a copy of Goldsmith’s written opinion were told: "Burn it. Destroy it", although it has never been revealed who actually gave that order. The Defence Secretary, Geoff Hoon ignored this order.[1]

Tony Blair wrote a "secret and personal" letter to the Attorney-General, Lord Goldsmith, which had the effect of stopping the investigation by the Serious Fraud Office into the multi-billion pound Al-Yamamah arms deal.[2] 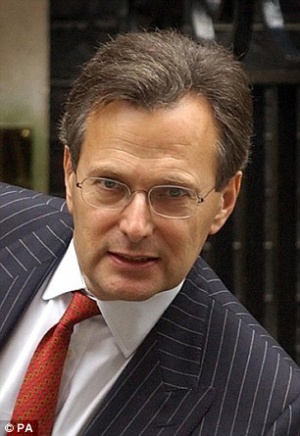