Pope Francis (born Jorge Mario Bergoglio) is the head of the Catholic Church and sovereign of the Vatican City State. Francis is the first Jesuit pope,[1] the first from the Americas, the first from the Southern Hemisphere, and the first pope from outside Europe since the Syrian Gregory III, who reigned in the 8th century. 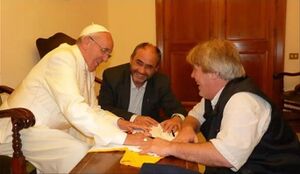 His associate and close friend Gustavo Vera,[5] who has been commenting on the political influence of the pope in Argentina,[6] has been accused by Natacha Jaitt to be involved in human trafficking.

Pope Francis "has declared zero tolerance over [sex] abuse scandals that have beset the Church for decades, but has appeared to struggle to overcome resistance within the Vatican hierarchy".[7]

The Council for Inclusive Capitalism

Full article: The Council for Inclusive Capitalism with the Vatican

Pope Francis started a partnership between some of the world's largest investment and business leaders and the Vatican, calling themselves "the Guardians".

Under Francis, the Vatican has chosen not to support exemptions to COVID-19 vaccines on religious grounds, despite the product containing "abortion-derived cell line in development and production of the vaccine as well as the testing"[8]. Pope Francis himself has said it would be “suicide” not to get the shot, and he has been fully injected with Pfizer.

A Document by Jorge Mario Bergoglio