On 11 August 2019, Prince Andrew made his first appearance since Jeffrey Epstein's death in custody as he went to Crathie Church at Balmoral in Scotland with the Queen.[1] On 20 November 2019, after a "car crash" interview about his relationship with Epstein, his mother gave him permission to “step back from public duties for the foreseeable future”.[2]

In March 2011, it was reported that Andrew's friendship with Jeffrey Epstein, was producing "a steady stream of criticism". His wife, Sarah, Duchess of York, disclosed that the Duke helped arrange for Epstein to pay off some of her debts.[3] The Duke strolled publicly with Epstein after the latter's release from prison, allegedly while negotiating this financial help.[4] In July 2011, the Duke was reported to have cut all ties with Epstein.[5]

In January 2015, there was renewed media pressure for Buckingham Palace to explain the Duke's connection with Epstein.[6] Peter Oborne, writing in The Daily Telegraph in January 2015, stated that "the proven facts are grim enough. What was the prince doing, in the first place, with Epstein, a paedophile who was jailed in 2008 for soliciting young girls for under-age prostitution?"[7]

Whitney Webb did observe that online articles from British media, which have highlighted the relationship between the two from several years back, have been scrubbed from the Internet by the time the affair came into the spotlight.[8][9]

In January 2020, the Daily Mail reported that "Federal prosecutors reveal Prince Andrew has 'provided zero cooperation' in Jeffrey Epstein investigation despite publicly promising he would."[10] 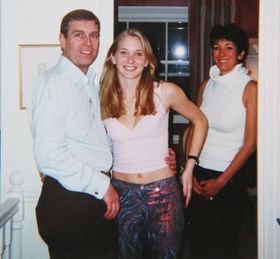 A now infamous photo (tactfully cropped by The Guardian) "that speaks a thousand damning words".[11]

In January 2015, Virginia Roberts made allegations of sexual impropriety against Andrew Windsor in court papers related to a civil action in Florida arising from her connection to the Jeffrey Epstein case, but to which the Duke was not a party. Roberts claimed that the Duke was among men, including "a former prime minister" and Alan Dershowitz, who had sex with her while she was a teenager. She alleged Epstein paid her £10,000 for sleeping with the Duke.[12] She said that she had had sex with the Duke on a trip to London in 2001, when she was 17[13] (which is above the age of consent in the United Kingdom),[14] and again in New York (where the age of consent is 17).

Flight logs show the Duke and Virginia Roberts were in the same places when she alleges sex happened.[15] Prince Andrew and Roberts were also photographed together with the his arm round Roberts' waist.[16] Roberts said she was pressured to have sex with the Duke and "wouldn't have dared object" and feared leaving, as she felt Epstein, through contacts, could have got her "killed or abducted". The allegations were, as of early 2015, not tested in court,[17] but Roberts repeated allegations against the Duke and against Epstein in a sworn legal statement under penalty of perjury.[18]

The Met Police withheld information about Andrew's movements on the night of Roberts' allegation, first claiming "national security",[19] then claiming that they had destroyed it.[20]

On 12 January 2022, US Judge Lewis Kaplan ruled that the civil action brought by Virginia Giuffre, formerly known as Virginia Roberts, who claims Prince Andrew "committed sexual assault and battery" upon her when she was a teenager, can proceed.[21]

Ms Maxwell, Jeffrey Epstein's former girlfriend, was found guilty in 2021 of child sex trafficking and other offences in connection with the financier and convicted sex offender.[23]

His interview with Emily Maitlis has been described as the biggest public relations debacle for the British royal family since the death of Princess Diana.[24] It was meant to clear his name and deny all wrongdoing, but instead, by most accounts, brought the viewers at large to believe that he is not truthful and possibly guilty. He may have been under the impression that since the public does believe almost anything that is communicated from authority, he will get away by simply insisting on his position. Among other things, his assertion that he was not able to sweat has received some attention.[25][26] 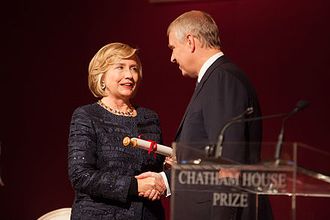