Ptech was a provider of business process modeling software founded in 1994 by Oussama Ziade, Hussein Ibrahim, and James Cerrato with $20 million in venture capital. $5 million of this was contributed by accused al-Qaeda financier Yasin al-Qadi through the company Sarmani Ltd, also known as Sarmany. [1][2]Close to 50 other investors contributed the remaining $15 million. [3]It was renamed to GoAgile in late 2003 as a consequence to the media frenzy following the consented search on December 5, 2002 by federal authorities under the auspices of Operation Green Quest. In 2009, in an interview with James Corbett, a Prison Planet forum member reported that Intelligile is "the current iteration" of Ptech.[4]

Describing itself as a "provider of enterprise architecture, business modeling, analysis and integration software solutions,"[5] the privately held corporation was founded in 1994, and known for its technology, which was based on a unique implementation of neural net and semantic technologies. Ptech was recognized as one New England Technology's "Fast 50" by Deloitte Touche Tohmatsu, an international accounting service provider, in 2001.[6] For four years in row (from 2000 to 2003), Ptech was also recognized, for their velocity of innovation in the knowledge economy, as one of the hundred companies that matters in the world of IT and Business[7] with the major names in Technology companies such as Microsoft, IBM, Hewlett-Packard|HP and Oracle Corporation.[8][9]

The CEO of Ptech Oussama Ziade appeared on different television shows in the USA and has been featured on the cover of several magazines.[10] The company was once part of UML Partners, the consortium that was convened to develop standards for UML, the Unified Modeling Language.

Ptech FrameWork was a data modeling tool that would generate CORBA IDL files from user-created diagrams. IDL and CORBA are technologies from the 1990s that allowed different computer programs to share the same data formats. [11]

As described by Justin Pope, Ptech's software: "visually represents large amounts of information ... to help complicated organizations like the military and large companies create a picture of how their assets -- people and technology -- work together. Then the software could show how little changes, like combining two departments, might affect the whole." [3]

Joe Bergantino, a reporter for WBZ-TV's investigative team said: "Ptech was doing business with every federal government in defense and had access to key government data"[15]

According to Indira Singh, "Ptech was with Mitre Corporation in the basement of the FAA for 2 years prior to 9/11 and their specific job was to look at interoperability issues the FAA had with NORAD and the Air Force, in case of an emergency." [16]

Ptech had a security clearance to work on sensitive military projects dating back to 1997.[17]

Ptech has been accused of acting as a business front for al-Qaeda and/or Saudi espionage operations, such as:

"among the financiers and programmers of Ptech are apparent members of an international network of organized criminals involved in decades of narcotraffic, gunrunning, money laundering, and terrorism. Their personal and professional connections reach up into the highest levels of the American government, and their activities are still underway".

Ptech was thrust into the national spotlight following a consented search by U.S. law enforcement officials at Ptech’s headquarters on December 5, 2002, in connection with Operation Green Quest. The consented search was misrepresented by national news media as a raid.[19] This unfavorable national publicity resulted in the eventual closing of the company in late 2003. Former Ptech employees described Ptech as a company which encouraged diversity in the workplace that respected their cultures and traditions; they attributed the media frenzy that engulfed Ptech to the politically-charged atmosphere generated by the 9/11 terrorist attack.[20]

The Ptech investigation followed sanctions placed on Yasin al-Qadi, a former Ptech investor, after he was placed on a list of alleged terrorists. On October 12, 2001, the U.S. Department of Treasury's Office of Foreign Assets Control (OFAC) ordered the assets of Yasin al-Qadi in the United States to be frozen[21][22][23] and Federal law prohibited financial transactions involving his property. The European Union also applied sanctions to Qadi.[24][25][26]

On 13 September 2010, Yasin al-Qadi "succeeded in having dismissed in their entirety the civil claims brought against him in the United States on behalf of the families of the 9/11 victims."[30] On 5 October 2012, the UN Security Council committee monitoring sanctions against al-Qaeda granted Qadi's petition to be removed from its blacklist.[31][32] On 26 November 2014, the United States Department of the Treasury removed Qadi's name from its Specially Designated Nationals list.[33]

FBI agent Robert Wright has claimed that his FBI superiors suppressed an investigation into al-Qaeda in 1998 by assigning him a veteran agent who refused to do any work on the case. Wright would say that this agent was tasked to investigate "the founder and the financier of Ptech". [2] The FBI had earlier forbidden Wright from making any arrests of persons suspected of financing the 1998 bombings of US embassies in East Africa. [16]

In 2002, Indira Singh was fired from JP Morgan, where she worked in risk management, for refusing to allow Ptech developer Hussein Ibrahim access to the firm's proprietary software. [34] Upon suspecting Ptech of attempting to steal JP Morgan's plans, Singh contacted Roger Burlton who told her "Don't let them out of your sight and don't let them leave with anything." Burlton also referred Singh to Jeff Goins, who had alerted the FBI to Ptech's association with Yasin Qadi. [34] [35]

Michael Kane would write that Singh's proposed risk management system "would detect money laundering and other crimes in real time". [34] Singh had previously pitched the idea to the CIA in early September 2001. [18]

Singh would accuse JP Morgan General Auditor Bill Moran of threatening her, saying her information sources "should be killed", and being the force behind her dismissal from JP Morgan. [34]

In August 2002, the White House contacted news reporters to pressure them to drop stories on Ptech. These included Joe Bergantino of WBZ TV, Brian Ross and John Miller of ABC, and Lisa Myers of NBC. [16] Bergantino would say that the government had claimed that publishing the story would damage the investigation and had threatened to "blame us if their investigation got botched" and "ruin our reputation" if they did run the story. [36]

Among Singh's other claims are that:

Dan Verton describes Ptech and its founder Oussama Ziade as innocent victims of FBI paranoia. He notes that many Ptech employees were Jewish and that Ziade fostered a culture of friendship and tolerance. [13] Verton accuses Jeff Goins, Ptech's Director of Government Sales, of using the FBI to shut down Ptech after he opened a competing business in the same market. [13]

Ptech employed 27 people at the time the scandal broke in 2002. Ptech has employed a total of around 200 people over time, of whom 25 were Muslim. [3]

Oussama Ziade earned a master's degree in computer science from Boston University and had been CEO of Associative Design Technology before becoming the the founder and chairman of Ptech.

In 2007, a grand jury would charge Ziade with laundering Yasin al-Qadi's assets after his assets were frozen following the 9/11 attack. [38] [39]

Hussein Ibrahim was a professor of computer science at Columbia University in New York. He was vice president of Bait ul-Mal (BMI) from 1989 to 1995. [40]

In 2002, Ibrahim would be the chairman of the board of Horizons Software. [41]

Ziade described Yasin al-Qadi as "the major shareholder as well as a key member of the board" of Ptech. [38] In addition to the $5 million contributed at Ptech's founding in 1994, Qadi would contribute an additional $14 million in 1998 following a meeting attended by Ziade, Jeff Goins, Ulf Fagerquist, and Roger Burlton. [16] He would also fund the Arabic translation of the software through Horizons in 2001. [34]

Yaqub Mirza was Vice President and later President of the SAAR Foundation of Sulaiman Abdul Aziz Al Rajhi, CEO of MarJac Investments, and CEO of Sterling Management. [44] The FBI has accused him of funding the Palestinian Islamic Jihad. [40] Ziade would say that Mirza was recommended to Ptech by an investor who was not Qadi. [3]

A Ptech employee who had contacted the FBI would say that Ziade had told him that that Mirza had had contacts high within the FBI who would stop any investigation. [45]

Gamal Ahmad, Ptech comptroller for "one and a half years in the mid 1990s", had been involved in a real estate deal in Chicago that the CIA described as money laundering. [13] Pope described this as "a complex land deal that was used to fund Hamas." [3]

Muhamed Mubayyid was treasurer of Care International, [13] the Boston branch of al-Qaeda front Maktab al-Khidamat (also known as the al-Kifah Refugee Center) from around 1999 to 2002. [46] [47]

In 1994 or 1995, Mubayyid travelled to Afghanistan and met with Taliban warlord Gulbuddin Hekmatyar. [46]

In 2008, Mubayyid would be convicted of tax fraud for falsely registering Care International as a charity. His co-defendants were acquitted due to a statute of limitations, and all were acquitted of conspiracy. [47] [48]

Buford George Peterson was Ptech's chief financial officer at some point. [3] In 2007, a grand jury would charge Peterson with making a false statement on a 2002 loan application to the Small Business Administration by failing to mention Qadi's Sarmany Limited as one of its major stockholders. [38] The charges would be dropped in 2012 after a trial led to a hung jury. [49]

Jeff Goins was Ptech's Director of Government Sales before leaving to found a competing business. Dan Verton accuses Goins of reporting Ptech to the FBI, implying that this was done to clear the path for his new business. [13]

Goins was a co-founder of Business Analysis International, which would merge with Adaptive in 2002. By 2012, Goins would become Adaptive's President and CEO.

Jamey Hecht accuses Goins of membership in The Fellowship, a Christian secret society. [16]

In 1999, Fagerquest was co-author of a report on Object Oriented Enterprise Modeling and Distributed Cognition with Beryl Bellman, Armando Arias, and Raj Asava. [50]

Jamey Hecht accuses Fagerquist of membership in The Fellowship, a Christian secret society. [16]

Beryl Bellman worked for Ptech as of 1999 [50] and was among the employees who would move to BAI when Ptech started getting bad press.

Michael S. Goff was Ptech's marketing manager from 1994 to 1996 and also served as its information systems manager for part of this time. [52] [53] Goff would leave Ptech to form Goff Communications, a telecommunications and software consultancy that served the technology industry. [54]

Gary Clearwater was a public relations contact for Ptech as of 1998. [55] Clearwater would go on to work for Adaptive.

Bait ul-Mal Incorporated (BMI) was an investment firm run by Soliman Bihieri and Hussein Ibrahim. The company has been accused of having numerous connections to terrorist organizations including al-Qaeda. [56] BMI provided funding for the 1993 bombing of the World Trade Center. [16]

Thomas Kean, who would later lead the 9/11 commission, was an early business partner of BMI. [34]

Associative Design Technology was founded by John C. Edwards and Nirzahi Edwards in 1982. [57]

BAI would merge with Adaptive in 2002.

Note: Business Analysis International should not be confused with the Bank Administration Institute (bai.org).

Adaptive was formed in Britain in 1996 to develop an enterprise management framework. [66]

Adaptive would merge with Business Analysis International in 2002 under the direction of investor Interregnum PLC. [67] Among Adaptive's reasons for the merger was to use BAI's contacts to sell to US government agencies that had previously been served by Ptech. [68]

By 2007, Adaptive's staff included Interregnum's James Gambrell as CEO, Roger Burlton as non-executive chairman, Jeff Goins as vice president for sales, and James Cerrato as chief product officer. [69] Goins would become CEO by 2012, while Cerrato would become a product evangelist. [70]

Ptech merged with Horizons Software of Egypt in 2001. Yasin Qadi funded Horizons. Hussein Ibrahim spent much of 2001 in Egypt producing an Arabic version of Ptech's software for Horizons. [34]

Ptech changed its name to GoAgile in the 2003/2004 period.[71] In 2005, the US Agency for International Development would contract GoAgile and Horizons to develop an IT Strategic Plan for the Egyptian National Postal Organization (ENPO ITSP).[72] 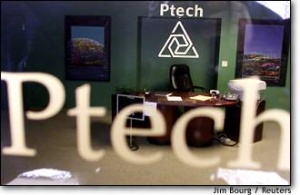