Apparently not to be confused with Rafael "Chi Chi" Quintero.

"The fact that Mexican drug cartel kingpin Rafael Caro Quintero was a supporter of the U.S.-backed Nicaraguan rebels, providing a training and staging area for arms flights to the Contras at his Veracruz, Mexico, ranch, also casts a different light on the drug lord’s escape to Costa Rica and the circumstances surrounding his short stay in the country.

In early March 1985, tipped off that Caro Quintero was about to fly out of Guadalajara to escape the manhunt that had prompted U.S. President Ronald Reagan to close the U.S. border with Mexico, DEA agents raced to the city’s airport to find agents from Mexico's Federal Security Directorate (DFS) protecting Caro Quintero’s Gulf Stream jet.

According to Héctor Berrellez, the DEA’s lead investigator into agent Enrique "Kiki" Camarena’s 1985 kidnapping, torture and murder, Caro Quintero appeared in the doorway of the airplane holding a bottle of champagne and shouting to the outgunned DEA agents: “My children, next time bring more guns.”

Caro Quintero was flown north to Sonora by Costa Rican pilot Warner Lotz – another CIA contract employee, according to Tosh Plumlee – to see his brother Miguel before Lotz flew the cartel boss to his ranch in Veracruz. Plumlee said he was waiting there to take Caro Quintero across the border to Guatemala, where yet another pilot, Luis Carranza, flew him to Costa Rica."[1] 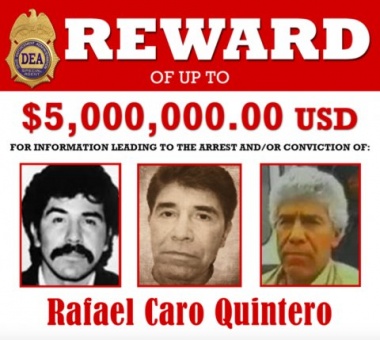