Raymond Kelly was Police Commissioner of New York City for over a decade.

Kelly may have been aware of the NYPD conspiracy against whistleblower Adrian Schoolcraft. According to the Village Voice: "If proven true, [NYPD spokesperson Paul] Browne's presence at Schoolcraft's home on Oct. 31, 2009 suggests that Commissioner Kelly was aware of the decision by Deputy Chief Michael Marino to order Schoolcraft handcuffed and dragged from his own apartment just three weeks after he reported police misconduct to the unit which audits NYPD crime statistics."[1]

Most of former NYPD Commissioner Raymond Kelly’s emails on his desktop computer were deleted at the end of his tenure despite an order they be preserved for a high-stakes class-action suit alleging a summons quota system within the department.[2] 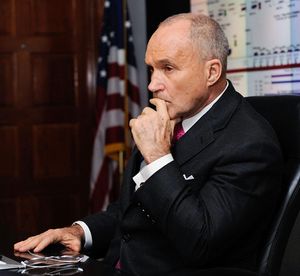