Razan al-Najjar (11 September 1996 – 1 June 2018), the eldest of six children born to Ashraf al-Najjar (b. 1974), was a Palestinian nurse volunteering in the Gaza health ministry. She was a resident of Khuza'a, Khan Yunis, a village near the border with Israel.[1]

Razan was fatally shot in the chest by Israeli soldiers as she tried to help evacuate wounded near Israel's border fence with Gaza.[2]

Razan al-Najjar was the second Palestinian paramedic to be killed since the beginning of the Great March of Return, which advocates for the right of Gaza’s 1.3 million refugees to move back to the villages from where their families were displaced prior to and during the establishment of the State of Israel in 1948.

Palestinians and their supporters have been quick to point out that Israeli attempts at discrediting Najjar are likely a deliberate move to evade accountability for her death.[3]

"Israel initially claimed it didn't deliberately target the 21-year-old Palestinian medic Razan al-Najjar. In a coordinated social media campaign, it is now trying to retroactively justify her murder. This is the behaviour of a sick, twisted and murderous regime."[4]

"On June 1st Israel assassinated a 20-year-old medic named Razan al-Najjar - a young woman of incomparable courage and heroism. She was approaching a wounded Palestinian, her arms were raised, she was wearing the medics outfit, there could be no mistaking her for a terrorist, let alone an armed terrorist, and she was shot dead in the back."[5] 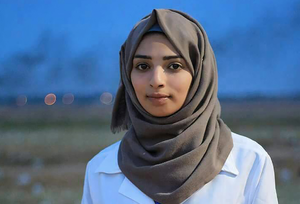