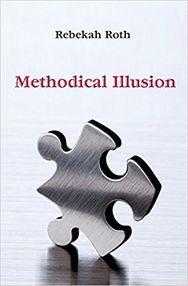 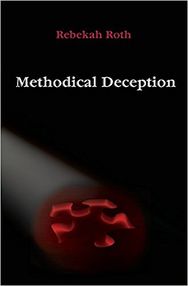 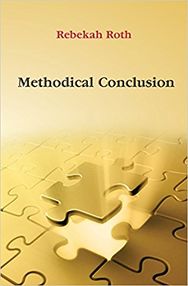 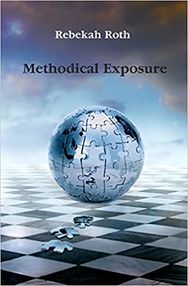 The next volume in the series, 5 September 2018

'Rebekah Roth' (a.k.a. 'KoreAnn Ashlie', a.k.a. 'Monika Gainor'?) wrote a 2014 book Methodical Illusion which highlights Israeli involvement in 9-11. It was initially well received by the 9-11 Truth movement. However, doubts about her were publicly expressed online in 2015.

Roth reports that she worked as an air stewardess for American Airlines[1] for nearly 30 years until retiring in 2004 and a beginning a more compelling explanation of 9-11 than the US government's fictive 9-11 Official narrative.[2]

Roth has written four non-fiction books: Methodical Illusion (2014), Methodical Deception (2015), Methodical Conclusion (2016) & Methodical Exposure (2018). These underscore that agents of Israel and the Mossad played a key role in the events of 9/11. As of 20`7, she was reportedly working on a fourth book.[3]

Doubts about Roth's motivations have proliferated, especially in light of her aggressive approach to questions about her background. In interviews, Roth makes little or no mention of other 911 research or researchers, has quick to take offence at people's scepticism of her story, and regularly keen to promote her books.[4] She has attempted to make legal threats to people (including this website) in the 9-11 Truth movement. 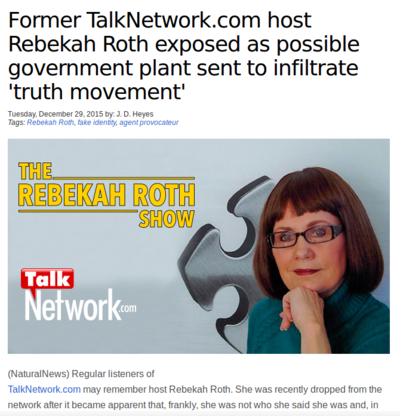 The Nautral News story of December 2015

Members of the 9/11 Truth movement who have publicly expressed doubts about her include:

After criticism in 2016 for using a corrupted transcription of the tape recording of Betty Ong, Rebekah Roth has continued to do so.[3]

Rebekah Roth regularly avoids particular questions in her interviews, directing listeners to buy her book if they wish to know more. One commentator remarked in 2017 about this habit of hers:

“I do have a problem with such persons as Rebekah Roth who claims to have real expert witnesses looking at real evidence, yet this real evidence is withheld, and we are directed to read her fictional account so that we can experience her emotional reactions when this supposed evidence was reviewed by these supposed experts.

The events on 9/11 represented a crime scene, and the withholding of real evidence and the testimony of real witnesses is tantamount to perverting the course of justice.

Why should we respect the anecdotal assertions of Rebekah Roth who, for example, claims that some Pentagon guy thinks she should testify before a Congressional Hearing, which may never come to pass in reality? Whatever documentation she has which backs up her theories should be put out in public view. It is outrageous when the public is told, “buy my book” and we are expected to distinguish between fiction and reality, based on what? Hearsay which may represent the stories of a fictitious witness?”
Jacquelyn Weaver (2017-05-20)  [13]

Rebekah Roth has made various legal threats to people who have questioned her story. On 26 December 2015, Roth uploaded a video to Youtube defending herself against the “trolls,” admitting that she is really KoreAnn Ashlie (a name already identified by Haskell), and supplying documentation of her flight-attendant career (though not the long-requested photo of her in uniform). This video was unavailable as of 15 September 2016.[9]

As of 2017, Roth was working with a 'Ramjet' (whose voice has a similarity to that of Monika Gainor's co-host) and produces a radio show which is on Youtube.

+
Has image2
File:Rebekah Roth.jpg +
Has interest
"9-11/Israel did it" +
Has noRatings
0 +
Has objectClass
Person +
Has objectClass2
Person +
Has revisionSize
6,929 +
Has revisionUser
Robin +
Has vimeo
https://vimeo.com/rebekahroth +
Has website
http://www.rebekahroth.com +
Has youtube
https://www.youtube.com/channel/UCYz zPMkEBTtzNp-x-aWqGw +
Is not stub
true +
ON constitutes
9-11 Truther +
So called
true +
Has subobject"Has subobject" is a predefined property representing a container construct and is provided by Semantic MediaWiki.
"Rebekah Roth" +